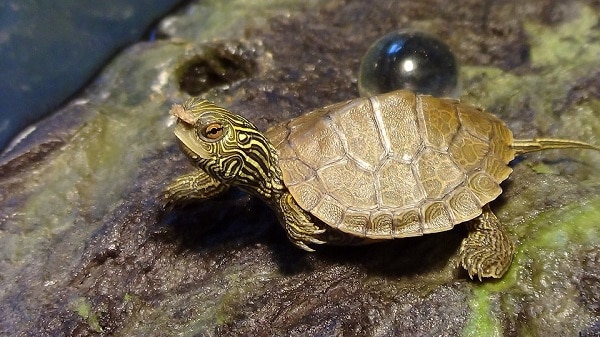 Don’t you think it is high time you checked the gender of your pet map turtle? Revealing the gender of the pet gives you many opportunities. You can house them accordingly, and also you can choose a perfect pair for breeding.

There are many methods, which can help you identify the gender of a map turtle. The most natural methods are by comparing the size, carapace structure, tail length, etc.

I have always heard that it takes a professional observation to determine a map turtle’s gender. But in this article, I will discuss how you can identify your map turtle’s sex even if you are a beginner. Try to follow the whole article to have a clear concept.

For a printable version of this amazing visual chart, click here!

Here is the size chart of different map turtle species at their adult age. You can compare the size difference by yourself.

From the chart, you can see that the female map turtles are larger than the male ones at the same age. You can determine the gender of your pet map turtle by comparing the size mentioned in the chart. But for that, you must have more than one map turtle.

You can determine the gender of your pet map turtle by comparing the shape of its carapace.

Check The Notch Of The Tail

You can identify the gender of your pet turtle by looking at its vent.

If you look at your map turtles closely, you will notice that there are differences between the head of a male and female map turtle. The male map turtles have a blunt face and a narrower head. Their eyes are yellow with a horizontal line through the pupil.

The female map turtles have a larger and broader head. They have yellow eyes with a triangular spot behind the pupil.

Examine The Front Claws Of The Map Turtle

Generally, the front nails of the male turtle of any species are longer than the female ones. It is because the male turtles use those claws during mating, and also they fight using them. There is no exception for the map turtles.

Compare The Size Of The Tails

The male map turtle’s tail is longer because its genitalia is located within the tail.

How To Come To A Conclusion

I have explained 7 methods by which you can determine the gender of your pet map turtle. Before declaring the determination, I recommend you consider at least two or three methods. In that way, the result will be accurate. Never decide anything based on a single observation.

Again, if you are comparing, you must have more than one map turtle of the same species around the same age. Otherwise, the result may not be accurate. As map turtles show sex dimorphisms in size, it gives us a considerable advantage while determining their gender.

When Is The Perfect Time To Discover A Map Turtle’s Gender?

I always suggest waiting for at least 2 to 3 months to identify the pet map turtle’s gender. When you decide the gender of a hatchling, sometimes the observation can go wrong. So, make sure the map turtle is not a baby while identifying its gender.

Does Incubation Temperature Affect The Gender Of A Map Turtle?

It is tricky to determine a map turtle’s gender as it does not have any external genitalia. But I have explained different ways to distinguish the sex of your map turtle accurately. I hope you guys will face no trouble to identify the gender of your map turtle anymore. Thank you for reading the whole article.

link to How Fast Can A Sea Turtle Swim?

When it comes to swimming, turtles are way ahead of the tortoises, especially sea turtles. I know the speed of any turtle species is nothing to boast about. Still, you can not ignore their swiftness...

Continue Reading
link to Snapping Turtle Release Guide: How & Where?

Last week something interesting happened. A team from Nashville Zoo released 16 alligator snapping turtles into the wild. Yes, I know it is not advisable to release turtles. But again, the statement...