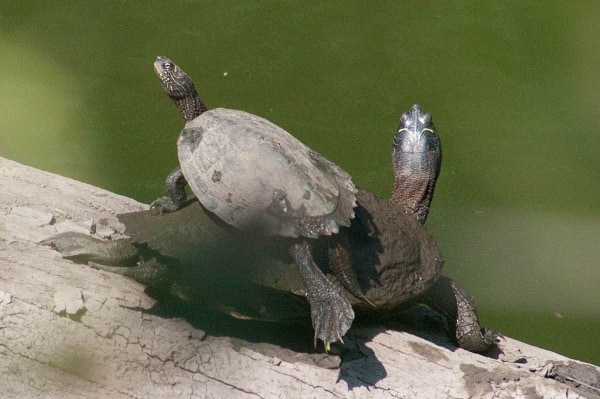 Breeding or mating process of turtles is a natural phenomenon. In the wild, the turtles can take care of themselves from the pre-mating process to the hatchling stage. But in captivity, if you are housing male and female adult turtles in a single tank or you are eager to breed them, you have to know the whole process. When it comes to the map turtle’s breeding or mating, a few things can be different from other species.

Most of the map turtle species mate twice a year. Female map turtles lay their eggs between mid-May to mid-June.

When Do Map Turtles Lay Eggs?

After finishing mating in October or November, the nesting season starts for the mother map turtles. It generally lasts from mid-May to late June. The mother turtle lays her eggs between May and June.

A mother map turtle can lay three clutches of eggs per year. Each clutch contains 8 to 22 eggs. The number of eggs can vary from species to species.

When Do Map Turtles Get Ready For Mating?

No matter how hard you try, you can not breed immature map turtles. So, before choosing the breeding pair, make sure they are sexually mature.

A male map turtle gets mature from the age of 4 to 6. For a female map turtle, it takes a longer time to get sexually matured. Generally, the female map turtles get ready for mating at the age between 8 to 14. The age of sexual maturity can vary from species to species.

What Is The Mating Season For The Map Turtles?

Map turtles involve in mating twice a year. The perfect mating seasons for map turtles are April and October to November.

The nesting season for the female map turtles lasts from mid-May to late July.

How To Breed Map Turtles In Captivity?

Map turtle is an aquatic species, and the mating process of this species is different from the land dweller turtles. If you want to put your map turtles through a mating process, you have to make some preparations.

Put at least a pair of map turtles in a separate water tank. Make sure there are one female and one male map turtle. If you do not know how to determine a map turtle’s gender, then measure the size of the turtles. In this species, female map turtles are bigger than the male ones.

The perfect mating ratio is 3:5. It means for three male map turtles, you have to provide five female map turtles. The partner ratio will increase the chance of successful breeding.

Make the tank environment suitable for breeding. Before going through the mating process, the map turtles should experience cooling off period. It generally lasts for 6 to 8 weeks, from January to February.

You have to turn off all the heating sources during the cooling-off period. Make sure the water temperature is around 50F to 60F. After certain months, you can get back to the standard tank temperature for the pets.

You have to separate the female map turtles after the mating process. Attach a nesting box with their tank. It is because map turtles can not lay eggs inside the water.

In the wild, the mother map turtles come to the shore to lay eggs. So you have to provide a perfect nesting box to the pet. Put a suitable substrate inside the box.

If you are raising your map turtles in the outdoor habitat, then there is no need for the additional nesting box. The mother map turtles will choose the beach area for laying eggs.

In the wild, the eggs hatch naturally. But when it comes to a captive environment, you may have to incubate the turtle eggs. The hatchlings come out between 2 to 3 months.

These are the steps you have to follow if you want to breed your map turtles. Now I will provide some additional information you need to know before starting the process.

Incubation of eggs is a must in the captive situation because you can not replicate the wild environment inside the nest. You would need an incubator for this. Use a multi-functional incubator where you can regulate the temperature and humidity.

First of all, you have to pull off the eggs from the soil without breaking them. Then clean them gently with a painting brush. Use a suitable substrate inside the incubator.

Before putting the eggs inside the incubator, make sure everything runs properly. You have to maintain 82F temperature inside the box during incubation.

It takes 70 to 90 days for the map turtle eggs to hatch. The period can vary from species to species. It also depends on the temperature and humidity inside the incubator.

After hatching, you have to put the baby map turtles in a separate tank and provide them with all the necessary care.

Importance Of A Nesting Site For The Map Turtles

A naturalistic nesting site is essential for the mother map turtle. Map turtles are aquatic species, but they come to the land area when it is time to lay eggs. If they do not get any suitable environment to lay eggs, they may do it inside the water tank, which is not good.

When the map turtles lay eggs inside the water, they lay one or two eggs at a time and continue doing it for a week. This can cause serious illness to them. That is why each turtle keeper should ensure a proper nesting site for the mother turtle.

Like most other turtle species, map turtles do hibernate in the winter season. Hibernation is a natural process when turtles go in a deep sleep and slow down their daily activities. During hibernation, turtles do not eat much and stay in a hole.

Some map turtle species like Mississippi map turtles do not need to hibernate. It is because they do not require extreme water temperatures to live a healthy life. They can cope up with a slightly lower temperature.

But the northern map turtles and other species have a tendency to go to hibernation during the cold season. If you want to put you map turtles in the process, you have to make them prepare for it. And also, take great care of your pets throughout the hibernating period.

Breeding or laying eggs is a typical scene for the map turtles. As a turtle keeper, you have to be prepared for any upcoming situations. In this article, I tried to explain the facts every map turtle owner should know. Thank you for reading the whole article.

link to How To Take Care Of A Baby Turtle In The Winter?

Winter gives a hard time for most of the turtle species. Most young and adult turtles can survive the cold if you offer them excellent care. But the low temperature can be an issue for the baby...

Continue Reading
link to How To Take Care Of Painted Turtles In Winter?

Do you know painted turtles are less cold tolerant than most other species? A small drop in the overall temperature can affect these turtle's body metabolism significantly. In the wild, the turtles...