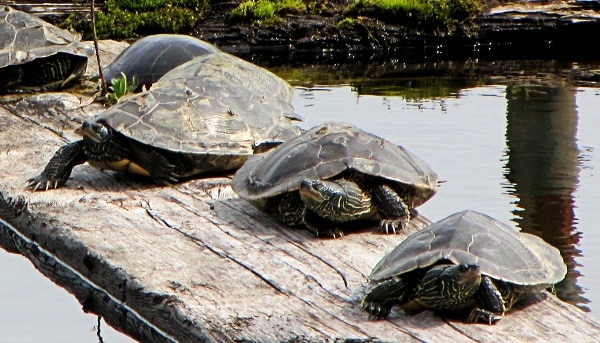 Map turtles are beautiful creatures with interesting habits. The species is very different from other turtles. Even some of its characteristics will make you astonished.

Some interesting map turtle facts are:

In this article, I will discuss the exciting facts about map turtles. At the end of the article, you will end up learning your pet more closely than before.

What is in the name?

If you have ever wondered why this species is called map turtles, well, I have a logical answer for you. To understand the part, “MAP,” just take a look at the carapaces and bodies of these tiny creatures. You will see thin lines running all over the shell, and all the dots eventually meet at a point.

In some cases, the lines can be disturbed by unwanted spots or markings. The design almost looks like a detailed road map. And that is why the species is called MAP turtle. Now do not confuse the map turtles with other species by observing similar patterns. These are very distinctive and different from other turtle species.

Why does it call Sawback turtles?

The map turtles have tiny knobs or spikes on the back of their carapace. The line of spikes looks like a saw on the turtle’s back. And that is why this common species is called ‘Sawback’ turtles.

Area Preferences of the Map Turtles

Where will you find them in nature?

We know that map turtles are semi-aquatic species, and they prefer living in rivers or lakes. Surprisingly, you may found more than one map turtle species in the same water body. The choice of habitat may vary from species to species. But the most common place to find them are:

Range of their habitats

Different studies claim that most of the map turtle species live all over the United States, especially in North America. Their natural habitat range extends from southeast Canada to the eastern and southeast United States. If you want to find a map turtle naturally, you have to look into their native habitats.

Most of the time, they do not change their location once they get settled. However, many map turtle species prefer living a secretive life, and they are hard to spot. Some of them live across thousands of miles. On the other hand, some spend their whole life in a small region.

Unlike most other turtle species, map turtles exhibit extreme sexual dimorphism. It means distinctive characteristics that will help you distinguish a male map turtle from a female map turtle. Some of these factors are:

Click here to know to identify a map turtle’s gender.

Females are larger than the males

Click here to know how big each map turtle species can grow.

Extinction and Law Regarding Map Turtles

Are we losing them?

It is unfortunate that many subspecies of these beautiful little creatures are threatened and are at the edge of extinction. Some endangered map turtle species are:

The reasons behind this miserable situation are:

Law and enforcement regarding map turtles

As you can see, most of the map turtle species are at the edge of extinction, the Government has stepped forward to save this creature. They have forced some rules on the selling and exporting of the endangered species. Such as:

Map turtle’s enclosure requirement is similar to a red eared slider. The species requires a large size habitat to move freely. Also, you have to set up a dock for the pet so that it can bask there.

Map turtles are sensitive to water quality. If the water is not fresh, the pet can suffer from various shell diseases. And that is why setting up a good quality water filter is always necessary.

Like all other reptiles, map turtles are cold-blooded. They depend on an external source to generate heat inside their bodies. In severe cold weather, without any proper heating sources, their heart rate and overall body metabolism fall.

To stay alive and healthy, they go dormant for the whole winter season. The map turtles choose fallen logs under the lake as their hibernation place.

Map Turtles Can Eat Everything

Do not take my words with literal meaning. By everything, I meant the species is omnivorous. But they prefer eating animal-based foods more than plants and vegetation. One more thing, the map turtles do not like very sweet foods like fruits.

Click here to learn the proper diet plan for your map turtle.

How Long Can You Pet Them?

It is sad that the map turtles have a shorter lifespan. Most of the turtle species have a life expectancy of about 70 to 100 years, the average lifespan of a map turtle is 20 to 40 years. Even some map turtles do not live up to 5 to 14 years.

Click here to know how long each map turtle species can survive in captivity.

Are Map Turtles Human Friendly Or Not?

Map turtles are not very social like many other turtle species, but they are not aggressive either. Their days pass by between searching for food and basking their bodies under any heating source. In case you force the species anything, they might bite you or can show aggression towards you.

Read this to know how you can keep the map turtle calm.

How Much Will a Map Turtle Cost You?

The price of a map turtle is very reasonable. Surprisingly, you can get one at around 6 USA dollars. But do not think the species is cheap. Some map turtle species may cost you more than 2000 USA dollars.

Click here to know the market price of all the map turtle species.

It takes a long time for the map turtles to gain sexual maturity. For the male map turtles, the age is 4 to 6 years, and the age is 10 to 14 years for the female ones.

Map turtles engage in mating twice a year, and the gravid map turtle can lay 3 clutches of eggs per year. You may find 8 to 22 eggs per clutches.

Isn’t it fun to know interesting facts about your pet map turtle? There are many more facts about the species yet to reveal. Thank you for reading the article. I hope now you feel a deep bonding with your map turtle.

link to What Are The Ideal Tank Mates Of Softshell Turtles?

Softshell turtles are an aggressive species. Their rough behavior often makes it difficult to raise any other small aquatic animal with them. If you have a turtle of this species, you must have...

Breeding or hatching eggs of only softshell turtles, but any other turtle species requires experience. This does not mean you can not breed your softshell turtle or hatch its eggs as a beginner. You...