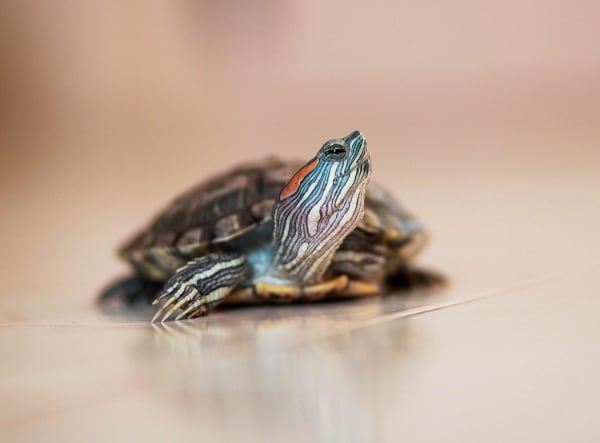 Red-eared sliders are not just adorable pets, they have some intriguing fun facts as well. As you already know, I have a red-eared slider. A few days earlier, I thought about digging some fun facts about them.

You, as a slider-parent will surely love these fun-facts as much as I did. So, let’s go a-slipping and a-sliding with the red-eared sliders’ fun facts.

Another noticeable difference is the sliders’ head, neck and legs are greenish-brown with yellow stripes. The color and difference between these are important to look out as both of them share the same habitat.

No Red Eared Slider in Antarctica

The red-eared sliders are inhabitant to the Mississippi valley of the United States especially in West Virginia, Ohio, Kentucky, Texas, Louisiana, Tennessee, Arkansas, Oklahoma, Kansas, Missouri, and Illinois. A good amount of their population is found in Asia and Australia. However, due to the weather of Antarctica, there is no red-eared slider in this area.

The preferred habitat of these turtles is freshwater and slow-moving lakes and ponds with maximum exposure to the sun.

Likes To Be In Groups

While sliders spend a definite period of their life in water, they also love to bask in the sun. in most cases, they bask in groups so that they can keep each other safe from animals like raccoons, foxes, minks, etc. those eat turtles.

The red-eared sliders are awesome swimmers but they spend most of their lifetime basking in the sun. They have great vision and poor hearing. Due to poor hearing, they are very sensitive to vibrations.

So even under small threats they quickly hide under the logs or rocks. Basking in the sun helps the sliders to get rid of parasites. Sun is as important as water to the red-eared sliders.

Red-eared sliders become less active during the winter. In October when the temperature hits 10⁰C, they go to the bottom of the lake. During this time, the sliders in the pond communicate with each other through touch and vibration. What an interesting way of communication!

Where Are The Teeth?

The adult red-eared turtles are herbivores whereas the young ones are omnivores. Both of them prey on the invertebrates and the mollusks, such as crayfish, insects and their larvae, shrimp, worms, and small snails. Some of the big ones are also known to eat water snakes, frog eggs, small fish and tadpoles. Along with this, they also eat the algae and aquatic plants including the hyacinth.

You must be amazed to know that, these red-eared turtles also eat birds. Although birds are tough to get, they are capable of eating small birds.

The females are slightly bigger than the males, but the males have more prominent longer claws than females. With age, the males especially, change its color to dark brown to black. Therefore, you can assume the age with their color, funny, isn’t it?

Red-eared sliders reach sexual maturity at the age of 2 to 5 years of age. One of the surprising things about the red-eared sliders is only 1% of the hatchling can make it to their adulthood. The rest of the eggs are often fallen prey to the birds, snakes, raccoons and other animals.

The fertility of the female sliders drops to 20% or even less after the first year of mating. Females lay around 3 clutches (75 eggs approximately) every season.

The sliders are very popular as they are easy to maintain. As the owner, you do not need to spend much time disciplining it.

Sun Is As Important As Water

Tougher Than The Dinosaurs

Okay, this fact is not specifically about the red-eared sliders but about turtles in general. The turtles are the authentic survivors of the prehistoric era. The difference between today’s turtles and prehistoric turtles is very little. The dinosaurs became extinct but the little turtles survived, well done!

They Can Live As Long As You

Lastly, the sliders live longer in captivity than in the wild. They live up to 40 years in wild whereas, 50-70 years in captivity.

Red-eared sliders are common pets across the USA and Asia. With minimum care, you can provide this cute animal a forever home. Hope these fun facts helped you to know your pet better.

Have you just bought a baby tortoise? Congratulations and welcome to the club. I know as a loving owner, you will do everything to ensure healthy growth for your pet. Do you know what is more...

Continue Reading
link to Sea Turtle Size: How Big Can Sea Turtles Get?

The word “Sea turtle” creates the image of a species with a large body, streamlined shell, and flippers in my mind. The marine turtles live a mysterious life in the ocean. Hence, most of the life...