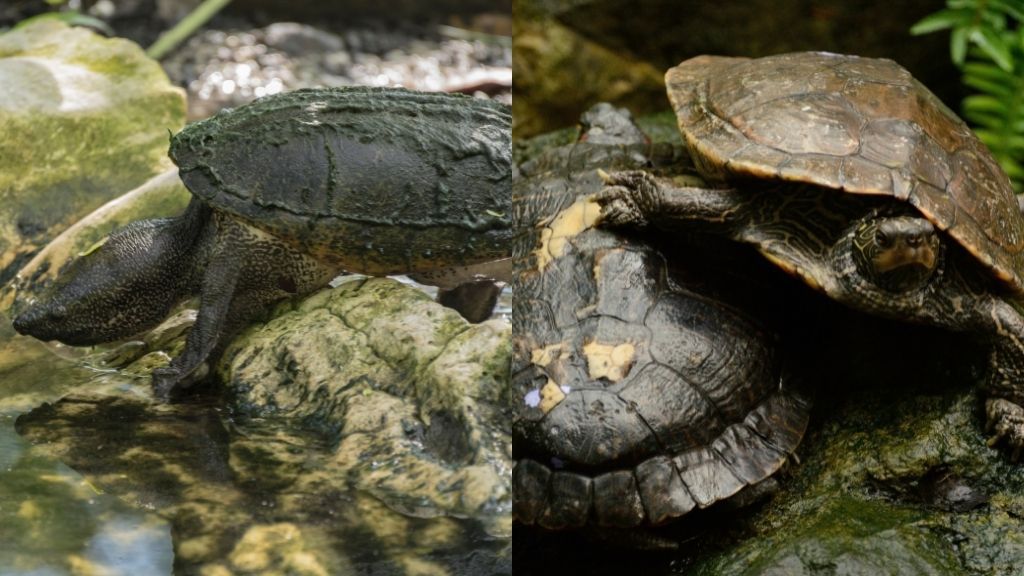 Last year, my friend wanted to start his turtle-keeping journey. He researched different species and finally decided to go with either mud or musk turtle. He reached out for my advice to clear his doubts, and I did what a good friend would do. I elaborated everything on both species so that he could come to a conclusion.

Both the mud and musk turtles are great for beginners. They share a similar type of care, behavior, size, and lifespan. The main difference between these two species lies in their appearance and native habitat.

Are you struggling to choose your first-ever turtle? If yes, I think this article will be a great help for you. I will draw a detailed comparison between the mud turtle and musk turtle, which will lead you to a quick decision. And who knows, you may end up having your first cute pet today?

Both the mud turtle and musk turtles are low maintenance and make an excellent pet. If you look at the care sheet of these two turtles, they have a similar diet and tank set up. The only difference between these two subspecies is in their appearance.

Mud turtles are slightly smaller than musk turtles. So, if you are looking for a smaller species, you can definitely try them out. However, some subspecies of musk turtles are also small.

Again, musk turtles have a longer lifespan of about 60 years. On the other hand, the mud turtles live around 50 years. Musk turtles will be a better option for a long commitment.

Other than these two factors, mud turtles and musk turtles differ in their looks only. If you have a personal preference, check out the appearances of all the subspecies of these two species and select your favorite one.

I have already stated that both mud and musk turtles share a similar type of care. So, their basic difference is hidden inside their looks and other physical characteristics.

If you prioritize the appearance of a pet, then these differences will be the gamechanger. I advise you to go through the chart below and see which species seems more appealing to you,

Mud Turtle Vs. Musk turtle: An Overview On The Care Sheet

Mud turtles and musk turtles have the same kind of care sheet. I have met with turtle keepers who keep both the species together without any hassle.

There is an ongoing debate on which species is more aquatic. Many turtle hobbyists believe musk turtles bask more frequently. On the contrary, others believe that mud turtles are the ones who prefer land areas more.

Well, there is no end to this debate, and both the species bask. Also, the mud turtles and the musk turtles are fully aquatic and bottom dwellers. So, you can not expect these turtles to bask as much as the other species.

Here is a comparison chart between the mud turtle and musk turtle care sheet:

Can Mud And Musk Turtles Live Together?

Mud and musk turtles can definitely live together. Many turtle hobbyists have been raising both these species in a single enclosure successfully without facing any hassle.

Compare the care sheet of the mud turtle and musk turtle from the above charts. They have similar types of requirements. Hence, any installation in the tank benefits both species.

As you know, turtles own a territorial behavior, and they prefer a solitary life. So, a tank mate is the last thing these creatures want. I have seen bloody turtle fights because of the wrong companion pairing.

So, what can you do? See, both the musk turtle and mud turtles are bottom walkers. It means they bask little and stay submerged most of the time. There will be a fight if the tank does not have enough space for both the turtles.

The best way to avoid turtle fights is by providing them with large tanks, spacious basking docks, and more than enough food. However, sometimes the tank mates might get involved in a fight instead of having every requirement fulfilled. In that case, you have to separate the turtles immediately.

Get more tricks to house two turtles in a single enclosure without any trouble by clicking here.

Which one is a better pet, between mud turtle and musk turtle? I say both of them are fabulous pets. The choice depends on your preference and priorities. I suggest you go through each point mentioned above and reach a final decision.