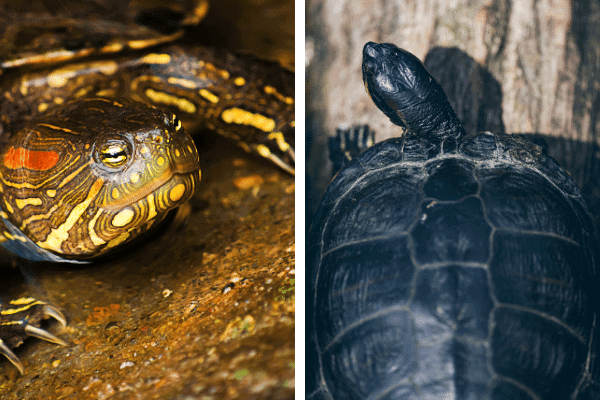 Both map turtle and red eared sliders are popular as pets. But the question is which one is better? Which species will prove itself as a better pet for the beginner turtle keepers? And the most important question is, why?

Red eared sliders are hardy, eye-catching, human friendly, and they can survive in rough environments. On the other hand, map turtles are excellent swimmers, good looking, and can cope up with the captive environment easily.

So, which one of these two will make a better pet for you? Do not worry. I will answer all the questions for you. In this article, I will try to explain, between the map turtle and red eared slider, which turtle species is the best for you and why.

Which Qualities Make a Turtle Better as a Pet?

People often ask me to suggest a better pet between two turtle species. Before answering their question, I tell them to go through the following characteristics of both pets:

You can ask me why I am suggesting going through these characteristics. By considering each point, you will get a clear idea about each species, which will help you make a final decision.

Who Has a Longer Lifespan in Captivity?

For many turtle owners, the lifespan of the pet matters a lot. Both the map turtle and red eared slider, have a shorter life expectancy than most other turtle species.

The lifespan of a captive map turtle:

The life expectancy of a captive red eared slider:

There is a noticeable difference in the market rate of a map turtle and a red eared slider.

I have mentioned the current market rate of both species. The cost can vary depending on the species, size, gender, and age of the turtle. I recommend you buy the one pet that will fit in your budget.

The more the number of subspecies available, the more choices we will get to select the perfect pet for us.

Map turtle has more than 14 subspecies and hybrid species under its name. Most of them can be raised as pets. Some of those subspecies are:

You can learn more about the subspecies of map turtles here.

The red eared slider is the sub-species of the Pond slider species.

Both map turtle and red eared sliders are semi-aquatic. So they have similarities in their housing requirements. I will give you an overall idea for the housing of both the species.

As both the map turtle and the red eared slider are omnivorous, their food habits are almost similar to each other. Before buying any turtle, you have to consider its food habit. Look through the list and make sure you can provide the pet with its necessary food items.

Here is a table that will indicate the food preferences of both map turtle and red eared slider.

Though both the turtle species are comfortable with humans, red eared sliders are friendlier than the map turtles. Map turtles can bite the owner if he is feeding it with his hands. On the other hand, red eared sliders play and beg for food. They love eating from the owner’s hand.

Depending on the environment, both the species can be exposed to different health conditions. A slight change in temperature can cause serious health issues to them.

If you ask me which one needs more care, the answer will be map turtle. We know that red eared sliders can survive in rough environments. But the map turtles can not live in low-quality water and fall sick easily.

As an experienced turtle keeper, I believe one thing, raising a turtle in its natural area makes it easier for the pet to cope with the captive environment. Though both map turtles and red eared sliders are available throughout the USA, buy the one available in your area.

The map turtles can be found all over the United States, especially in the southern river systems. And the south-central and south-eastern part of the USA is the natural range for the red eared sliders.

Go through all these characteristics of both the turtle species. See which one is more suitable for you. If it is map turtle, it’s an excellent choice. If not, go and buy a red eared slider.

I always say one thing. It is not the species that make a great pet, but how comfortable you are with the pet. If you are satisfied with a turtle, even if that is less popular, that pet is better than any other species.

Can You Put a Map Turtle With a Red Eared Slider?

As both turtles have the same housing and food requirements, they can live together. You must consider their sex, size, and age if you are planning to put a map turtle with a red eared slider. The young and adult turtles can be aggressive towards each other.

Make sure you are providing enough food and space for both the species. The red eared sliders are more aggressive than the map turtles when it comes to fighting. Although the living compatibility depends on the individual turtles, you must manage a separate enclosure for any emergency.

Can a Map Turtle Mate With a Red Eared Slider?

The answer is yes. A map turtle can mate with a red eared slider because of the similar genetic codes. But the question is, should you let them do that?

You’ll most probably get a hybrid hatchling by breeding a map turtle and a red eared slider. That questions a lot about the purity of both the species and also, the female turtle may suffer from some medical conditions because of this. So, if you notice your map turtle mating with a red eared slider, I recommend you consult a vet immediately.

Both the map turtle and red eared slider are great as pets. I hope by now you have decided which one you want to buy. If you have any further queries, do not forget to notify me.