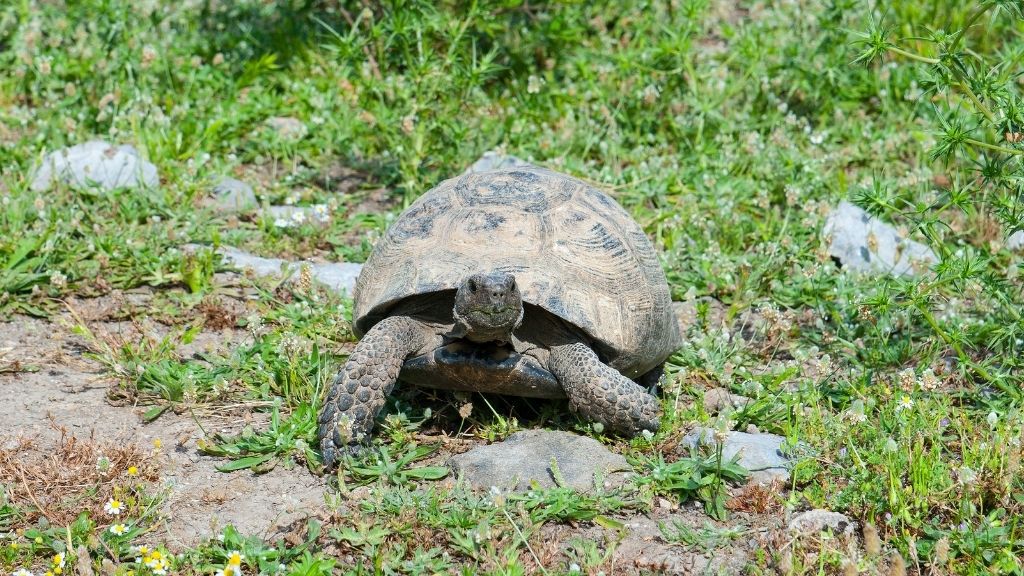 Have you seen the viral video of tortoises sprinting in circles somewhere in Disneyland? Weird internet. Right? The video was created using CGI (computer-generated imagery). But it makes us wonder, “can tortoises run?” If yes, then how fast can a tortoise run?

You can tell from the average speed that a tortoise is not good at running. But why? Are tortoises faster than turtles? Find out all the answers in the following article.

How Fast Can A Tortoise Run?

Honestly, tortoises do not run unless they have to. Even while walking, these creatures maintain a slow pace.

I am sure you must have heard the famous story of ‘The Tortoise & the Hare’ The slow tortoise won the race against the speedy hare due to its consistency and dedication.

Trust me. The tortoises have the same cool and calming nature in real life.

However, tortoises definitely run faster depending on the situation. For example, if the creatures sense danger, they will speed up their movement and make an escape.

So, what is the average speed of the tortoise? Take a quick look at the given chart, and you will get the answer.

Tortoise species and their average speed:

If you look at the speed chart of different tortoise species, you will find one thing in common. Most species can not speed up over 0.3 mph except Leopard tortoises. It proves that tortoises are slow.

Yes, the Russian tortoise seems another exception, but the sources are not experimentally proven.

If I go by the definition of running, then tortoises can not run. These creatures travel around at a slow pace. But under some conditions, the tortoises move slightly faster than usual.

You can refer to the quick movements as running if it fits your definition.

I have mentioned the speed of different tortoise species in the previous subsection. I know the average 0.13 m/s is not a great speed, but that is the best a tortoise can do.

The walking speed of a tortoise also ranges from 0.05 m/s to 0.13 m/s, or even less. So, you can not really differentiate between a tortoise running and walking.

While 0.05 to 0.13 m/s is the average speed of almost all tortoise species, Leopard tortoises can move faster than this. These creatures walk at a pace of 1 km/h or 0.28 m/s, which is excellent compared to the rest of their relatives.

Why Are Tortoises Slow?

Tortoises are slow, and you can not ignore the fact. But have you ever wondered why the species have such slow motion?

Experts have pointed out more than one factor that might be the reason behind a tortoise’s sluggish nature. Such as,

See, every animal in the wild struggles to collect its meals and survive. Even the fast speed or defensive nature is also centered around diet and survival.

What if there is plenty of food in the wild? Of course, no animal will ever have to run for prey or attack another species. Right? This is what happens with tortoises.

Tortoises are herbivorous. These creatures live on the greens, which are abundant in the wild. In short, tortoises do not have to hunt down any other animal or chase their food. So, the speed matters a little to the tortoises.

Now you tell me. Why would tortoises run if they do not have to?

Do you know tortoises can live for more than 300 years? It might sound impossible, but scientists claim to have proof. How do you think tortoises manage to have such longevity?

The answer is slow metabolism.

You know the tortoise’s body mechanism depends on the surrounding temperature. When the temperature falls, the creature acts slower than before. Also, the tortoise can survive for days with only one meal.

All these facts are linked to the slow metabolism of the tortoise.

The tortoises spend less energy due to their slow metabolism, which is why they are sluggish and slow. Experts suggest that slow metabolism is the secret recipe for longevity. Humans and most other animals have a fast metabolism and short longevity.

3. No Need To Escape

Tortoises have a bulky body and a heavy shell on their back. Many people think the physique is the main reason why tortoises do not move fast.

Well, you obviously can not ignore the weight the tiny legs of these creatures have to carry. Yet, the tortoises evolved to move on the land. So, this is a minor fact that influences the speed of a tortoise.

But yes, the bulky physique has other roles in deciding the speed of a tortoise.

See, whenever there is a sign of danger, every animal runs for life and searches for a safe place to hide. But tortoises move with their secure box. If the creatures sense danger, they retract their bodies in their shell and detach from the world.

Again, most tortoises are too big to get attacked by a predator. Even if a mighty predator approaches the species, it is difficult to crack open the flesh by breaking the shell.

The security of life is a crucial point why tortoises require no fast speed to survive.

The tortoise shells are heavy, and there is no doubt about that. According to sources, the shell of a tortoise weighs around 5 to 25 pounds depending on the species.

It is scientifically proven that a shell can withstand 100 to 200 times more force than its weight.

I hope you can guess how sturdy the shell of a tortoise is. Yet, it can get fractured. Fall from a height or severe accidents can crack open the shell.

Moving in speed increases the risk of falling and having an injured shell. This is a reason why tortoises are better without speed.

When Do Tortoises Move Faster?

You already know tortoises do not run unless they have to. So, what can be the reasons that drive a tortoise to move faster? Here are the best answers,

How Fast Is The World’s Fastest Tortoise?

The world’s fastest tortoise can move at a speed of 0.28 m/s (1 km/h). A British tortoise named Bertie unlocked this success in 2014 and registered his name on the Guinness World record as the fastest tortoise.

Bertie is assumed to be a Leopard tortoise. He made the world record in his home yard in Brasside, Durham, the UK, on July 09, 2014.

Bertie’s owner made him sprint on a 5.48m course. It took Bertie 19.59 seconds to finish the goal at a 1:12 gradient. Right after that, Bertie was tagged as the fastest tortoise in the world.

Journals and experts all over the world have already announced Bertie as the Usain Bolt in the tortoise world.

Before Bertie, another British tortoise, Charlie had the crown of the fastest tortoise in the world. He had a record speed of 0.125 m/s. Charlie was the champion from 1977 until 2014.

Who Is Faster, Turtle Or Tortoise?

Turtles are undoubtedly faster than tortoises. While the top speed of a turtle is 3 to 4 miles per hour, a tortoise barely manages to run at a 0.63 mile per hour speed.

The terrestrial turtles or box turtles walk at an average speed of 0.17 to 0.25 mph (mile per hour). Wood turtles have a similar running motion around 0.20 mph. Cooters are faster than most other species and run at a speed of 1 mph.

The fastest turtle species is softshell turtles. These turtles run at a speed of 3 mph, which is impressive considering the other species record. Softshell turtles can manage to move faster because of the light, soft shell on the back.

Other turtle species are not so great at speed. The reasons behind this are slow metabolism, food security, shell protection, etc.

Now, compared to turtles, tortoises are slower. The average speed of tortoise species is 0.13 to 0.3 mph. Almost all tortoise species, Sulcata, Indian star, etc., walk or run at close speed.

Leopard tortoises are faster compared to all other species. They can run at a speed of 1 km/h or 0.28 m/s. The fastest tortoise in the world also belongs to this species.

Do you wonder what makes the turtle faster than a tortoise? Follow this article to get your answer.

What Is The Fastest Type Of Tortoise?

Many sources claim that the Russian tortoises can run at 8 km/h speed. The number seems impossible, considering the track record of the tortoises. However, this fact is yet to be proven.

How Far Can A Tortoise Walk In A Day?

A tortoise can walk 300 meters to more than 10 kilometers in a day. The distance the creature will cover depends upon its species, size, and walking speed.

You already know tortoises are slow travelers, especially the smaller ones. They move at the maximum pace of 0.63 mph (mile per hour). Even though tortoises are notorious for their slow speed, you can not question their ability to travel long distances.

The tortoises can walk and cover more distances than you can even imagine. Walking 10+ kilometers in a day might sound odd and impossible for a tortoise. But experts claim that theoretically, it is possible.

On 29 September 2017, a news article was published featuring an old male tortoise. He traveled 6 miles or 10 kilometers in a day to meet the female kept in a zoo.

If an old tortoise can travel 10 kilometers in one day, imagine how far an adult will cover?

Which Is Faster, Tortoise Or Sloth?

See, tortoises win over the sloth only by a fraction. On average, the speeds of both the animals are close and similar. The interesting fact is, both sloths and tortoises are on the list of the slowest animals on the earth.

Let’s compare the tortoise speed with other slow animals.

As per sources, snails are slower than tortoises. Their crawling pace is 0.05 km/h, which is much less than the tortoises.

On the other hand, the slow loris is faster than tortoises. Where a slow loris can reach up to 1.9 km/h, the maximum speed of a tortoise is 1 km/h.

The average speed of a tortoise is 0.13 to 0.3 mph or a mile per hour. A British tortoise, Bertie holds the title of the fastest tortoise on earth with a sprinting speed of 0.63 mph.