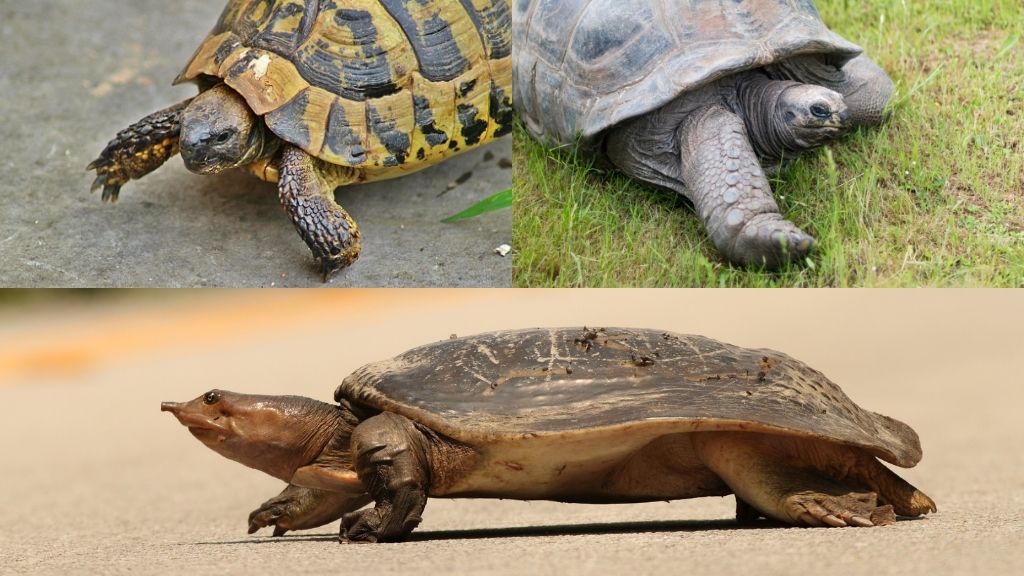 The myths about a turtle’s speed have not lost their popularity yet. People believe turtles are anything but not made for a sprint. Rather, they are more of a marathon material. Is this true? Can turtles run?

Turtles can run. Their average speed is around 3 to 4 mph (Meter per hour) or 4.8 to 6.4 kph (Kilometer per hour). Depending on the species, this speed may increase or decrease.

What makes this species run slow? Recent inquiries have revealed the causes and facts behind turtle’s speed. In this following article, I will discuss ins and outs of a turtle’s run.

How Do Turtles Run?

Some people believe turtles can not run. Well, this is not the whole truth. Due to the slow speed, some people may compare the turtle’s run with walking. But trust me, considering the turtle’s body structure and speed, that is running. Now the question is, “How do turtles run?”

Well, the running mechanism of turtles is not that much different than their walking one. They move one or two legs forward at a time and establish a firm grip on the land. Then switch to the alternative legs. This way their whole body weight stays distributed and no leg gets extra pressure.

While running, the movement just speeds up a little bit. Instead of dragging themselves through the land, the turtles move their legs in an up and down movement. This is what helps them run.

How Fast Are Turtles In Land?

Turtles can be the master of swimming but when it comes to running, these pets will take a step back. Surprisingly, the turtles’ speed on the land is not so good. Some species will manage to run at 3 to 4 mph. While others are way too slow than this.

According to the records, the box turtles run at an average speed of 0.25 mph. This is their speed over a short distance. It will be much less when they have to cover a large area. The walking pace of box turtles is around 0.17 mph. This speed will surely remind you of the story of “The Tortoise And The Hare”.

The calculation says, a box turtle barely covers 100 yards a day. As box turtles are not good at running, they protect themselves only with the shell. Similarly, the bog turtles have clocked to travel 200 meters or 600 feet in just 2 weeks.

Cooters are fast in the water but not on land. Their average running or walking speed is around 1 to 1.07 mph. Though they are faster than the box turtles and the bog turtles, the speed is not great. Wood turtles have the same running pace as box turtles. It is around .20 mph or 0.32 kph. For the slow turtles, the best way to protect themselves is to hide in the shell.

However, softshell turtles are faster than most species. Their recorded running speed is 3 mph, which is definitely fast. Sea turtles and pig-nosed turtles, on the other hand, struggle to run due to their flippers. Their feet are not designed to walk longer on the earth. So, you can not expect a good speed from these species.

These slow turtles manage to hold the average speed over a short distance. Then they will need a break. Nevertheless, turtles can be fast in a few conditions. For example, when these creatures are under attack, they will run for life. The good swimmers run towards the water so that they can escape easily.

Why Do Turtles Run Slow?

Who is responsible for the turtle’s slow running speed? I have managed to think about one big factor that hampers a turtle’s running speed. It is nothing but the physique of these animals.

Even if you take a single glance at a turtle, you can not ignore the big shell on its back. The data says one average shell may weigh around 5 to 25 pounds depending on the species, age, and size of the turtles. So, the turtles move around with this heavy shell along with their body weight. Can you imagine that?

I am not saying it hurts the turtles moving with the shell. But yes, the shells are the reason why turtles are a bit slow in running compared to other animals. Another thing you need to notice is their legs.

The legs of turtles are not that big compared to their huge body. Stretching the front and rear legs too far is difficult for the turtles. So, running at a fast speed is somehow impossible for them.

However, shells are biologically designed to swim underwater. So, it is no wonder why it feels too heavy on the land and makes the running slow.

Facts Behind Turtles Being Slow

You know turtles not only run slow but also move at a similar speed. It is not just the heavy shell or physical structure that makes these creatures slow. There are other factors responsible for it. Such as,

The abundance of food: Most turtle species are omnivorous, which means they can live on both plants and animal-based foods. On land, they can easily get their meals without hunting or preying. Also, in water, the small fishes, worms, and insects are not difficult to catch. As turtles do not have to run after food, why should they run at a full speed?

Assurance of protection: Most animals are afraid of getting under attack and so they practice running. When it comes to turtles, they have a solid shell for protection. According to records, an empty turtle shell can carry 200 times more than its weight. So, it will take a severe attack to damage the shell.

Turtles know they are slower than the predators. If they try running, the opponent may beat them and eat alive. Instead of taking the risk, turtles choose to hide in the shell. Without much exercise, their leg muscles are not developed much for running or moving fast.

Slow metabolism: Even if you are not a turtle expert, you know they have a slow metabolism. We humans and most other animals have a fast metabolism which affects our speed. We can move fast while turtles move at a slow pace. So, metabolism is one of the major reasons why turtles are slow.

Do not think having slow metabolism is a bad thing. Rather, it will offer you a longer life. Depending on the species, turtles can live up to five centuries.

Fear of self-harm: As the shell protects the turtles, they also have to take care of this shield. If by running or moving fast, these creatures have a fall, it will impact the shells. In worse cases, there will be cuts or spine breaks. These conditions can lead to shell infection or rot.

For these reasons, turtles have evolved over time to move or run slow. In return, they have been blessed with a beautiful long life.

The Fastest And The Slowest Turtle On Land

Till now, you have got an idea why turtles are slow on land or why they can’t run fast. But do you know some species run really fast? Take softshell turtles as an example.

As per record, the average running speed of a softshell turtle is around 3 mph. They can beat this speed in some situations. In water, their speed rises to 15 mph or more. What makes softshell turtles run so fast?

Experts believe it is the rubbery, soft shells that make this species gain great speed. The weight of the shells is not much. So, turtles can easily carry and run with it. Also, their leg muscles are strong and well adapted for both land and water. Check this article to get an insight into a softshell turtle’s speed.

On the other hand, box turtles are considered one of the slowest turtles on earth. They move at a speed of 0.9 to 0.25 mph, which is undoubtedly slow. Cooters also move at a low speed but not like the box turtles.

Turtles gain a faster speed in the water. The average swimming speed of turtles is around 10 or 12 mph. It can boost up to 22 mph or more. The fastest turtle in water is the leatherback with a speed of 35 kph.

Turtles are slower compared to most other animals. But their speed suits their lifestyle and habits. You can not imagine a turtle running a sprint and winning it. Rather, let them run in their own marathons.