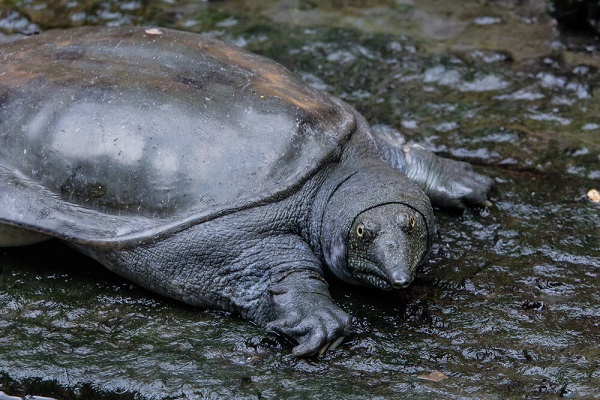 Turtles with hard shells can easily fight against the predators and protect themselves in the wild. But what happens to the softshell turtles? How does a softshell turtle protect itself in danger? If you are wondering the same questions, then this article is for you.

In this article, I will discuss the survival methods of a softshell turtle in the wild. If you are interested, do not forget to give this article a quick read.

Why Are Softshell Turtles Vulnerable To The Predators?

The hard shell is the main weapon of any turtle to protect itself. But biologically speaking, the softshell turtles do not have hard shells. Instead, this species owns a flat and rubbery carapace. The edge of the shell is pliable and has small spines.

This flat, rubbery, and soft shell make this species vulnerable and exposed to the predators. In case of any fight, the softshell turtles will get wounds on the shell easily. And the injury often leads to shell rot and other life-threatening diseases.

However, most predators consider the softshell turtles as a delicious treat. It is because these turtles have more meat compared to other turtles. So, whenever the softies are basking under the sun or come to the land, the predators keep an eye on them and look for a fair chance.

How Do Softshell Turtles Protect Themselves?

Till now, you may be thinking of the softshell turtles as a timid species, and always afraid of being attacked. But wait, that is not the actual case.

The wild softies follow another strategy to save themselves. They bury their bodies at the bottom of the muddy water and wait for the predator to go. You have to admit this one is a pretty good plan.

Survival Of The Softshell Turtles In The Wild

I have discussed how the softshell turtles protect themselves from the predators. But what about the wild survival? Do you know how a wild softie overcomes all the challenges? Let’s talk about those things.

When a softshell turtle wants to settle down at a place, at first it needs to select suitable habitat. Obviously, each softshell turtle species has its own natural habitat range, which it hardly crosses. Find out the geographical ranges of softshell turtles in this article. The softies always prefer the rivers, lakes, and freshwater sources with muddy or sandy bottoms and little vegetation.

Secondly, the softshell turtles in the wild depend on nature for food. If a turtle gets a suitable place to live in and a source of food, it will live an average life. Unlike the captive softies, the wild ones need to prey to survive.

The softshell turtles are carnivorous. So, they live on the amphibians, fishes, crustaceans, insects, and other small creatures. They apply an amazing strategy to ambush fishes.

You know these turtles have distinctive flat, leathery shells and long tubular snouts. They hide in the mud or sand, keeping the eyes and snout exposed. Whenever a fish or other small creatures pass them, the softies strike immediately. Using the three sharp bony plates in their mouth, the softshell turtles rip the fishes off. This is the feeding strategy of the wild softies.

You know the weather in the wild can be rough. Winter is a nightmare for almost all turtle species. As they can not regulate their body heat and depend on the environment, the winter can be harsh for the softies. To survive the cold weather, the softshell turtles hibernate during the winter.

The softies bury themselves in the sandy or muddy bottom of the lake or river and go for a long sleep. The turtles drop their metabolism and other energy consumption rate. The softshell turtles only need a little amount of oxygen to survive the dormancy period.

Are you wondering how the softshell turtles breathe underwater? Well, this is called pharyngeal breathing. The softies are biologically programmed to exchange oxygen and carbon dioxide via mouth, throat, and skin.