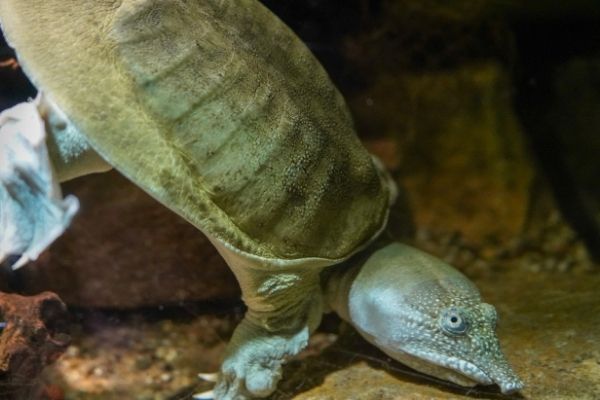 If you want to know more about the mating behavior of a softshell turtle or how to breed them, then this article is for you. Do not forget to read to the end.

How Do Softshell Turtles Mate?

Scientists believe that spring is the mating season for the softshell turtles. Obviously, courtship can occur at any other time of the year. But at this season, softshell turtles stay at the peak of their reproductivity.

First, the male softshell turtle will nudge or chase the female one in the water. The chasing pattern is really interesting. When two softshell turtles come in a close distance, they will start to swim around each other. They will submerge under the water and reappear on the surface a few times.

There is another type of mating attempt in softshell turtles. A male softshell turtle often makes his move when the female one is basking on the dock. Usually, the male turtles move from turtles to turtles on the basking dock and investigate their gender. He will extend his neck and place the snout under the edge of the carapace. If the basking turtle is male, he will not respond to this behavior and leave the place.

On the other hand, if the basking turtle is a female, she may respond in 2 different ways. Such as:

To get a solid grip, the male softshell turtle will land on his hind feet and bring his cloaca closer to the female’s cloaca. The mounting phase can last for 5 to 1 hour. After that, the intromission phase starts.

According to a study, 4 out of 5 mating attempts become successful. Also, the courtship activity of the captive softshell turtles is more effective compared to the wild ones.

You can not just breed any softshell turtle pair. To make successful breeding you have to do everything perfectly. Here are some factors that you need to cross-check before putting them for a mating:

Gender Of The Softshell Turtle

Check this article to get the step by step process of identifying the gender of a softshell turtle.

Age Of The Softshell Turtle

Health Condition Of A Softshell Turtle

Mating can be a stressful process for the softshell turtles. That is why you have to make sure the breeding pair is mentally and physically healthy. How will you determine if the pet is in its right condition?

Observe the softshell turtle’s growth, weight, and daily activities. Compare the data to any healthy turtle. Or the best option is to do a proper checkup by a vet.

How to Choose A Good Breeding Pair

It is not mandatory to always maintain the ideal mating ratio. You can put a pair for breeding too. Here are some tips that will help you select the perfect softshell turtle breeding pair:

If you are thinking about breeding your pet turtles, consider making preparations to increase the success rate. For example, feed the turtles well, do regular health check ups, and create the perfect environment for mating.

It is always preferable to breed the softshell turtles in an outdoor pond. But a well decorated aquarium is also good. Just make sure the tank is large and deep enough for the pair. Also, set up the necessary supplies like the water filter, tank heater, basking dock, UV light, hiding places, substrates, and so on. Here is a foolproof guide to softshell turtle tanks set up.

However, preparing a breeding pond will also benefit you. Most of the professional breeders use these kinds of ponds to conduct successful breeding of the softshell turtles.

Once the environment is ready, put the turtles in the enclosure and observe their behavior. Sometimes the male or female softshell turtles do not get along so well. That can lead to fights and one party may get injured. However, if your softshell turtles get along well and mate several times, separate them after a few days.

She will search for a suitable place where she can lay eggs. She will dig the soil using the hind claws. After laying eggs, she will cover the hole with dirt and leave the place.

In the wild, gravid softshell turtles lay eggs on the river shore. The eggs hatch naturally and sometimes the predators eat or steal one or two eggs. But in captivity, you can not depend on nature for egg hatches. Why? This is because the captive temperature and humidity are not perfect.

So what is the solution? I recommend to incubate the eggs in another medium. You will find turtle egg incubators or you can make one by using a plastic container and proper medium. Maintain a really high temperature around 80 to 82 degrees Fahrenheit and humidity around 90% inside the incubator.