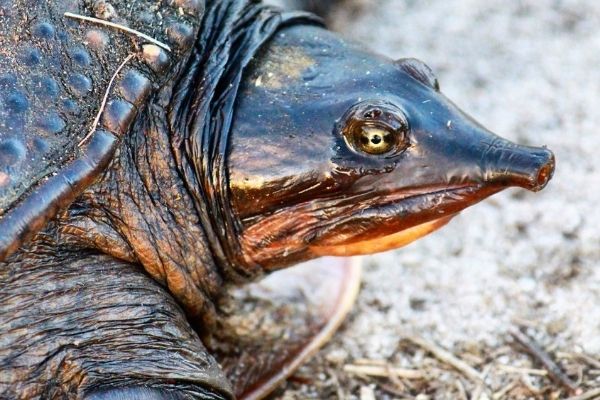 You can determine the gender of a softshell turtle by observing or comparing its:

How To Determine The Gender Of A Softshell Turtle?

While determining the gender of a softshell turtle, you need to consider some factors. Such as:

Let’s discuss these factors one by one.

The easiest way to determine a softshell turtle’s gender is to measure its size. Unlike many other turtle species, the same-aged female softshell turtles are larger than the male ones. So, you can compare the turtle’s size with another one of the same age and species.

Here is a chart that indicates the size comparison of adult male and female softshell turtles:

Click here to get more information on a softshell turtle’s size and growth factors.

On the other hand, the tails of the male softshell turtles are much larger than the female ones. Their tails are thick, wide, and lengthy. The male tails can reach further than the upper shells.

The larger hind claws benefit the female turtles in many ways. For example, a gravid turtle digs a hole to lay eggs using her hind claws. On the other hand, the male softshell turtles use their claws while mating.

As the female softshell turtles are bigger than male ones, it is obvious that they will weigh more too. You can also determine the gender of a softshell turtle from its weight.

Here is a chart that shows the weight difference between the male and female softshell turtles:

From the chart, you can see that the male softshell turtles weigh almost ⅔ of the female ones. Check this article to know the weight of different softshell turtle species.

Things You Need To Remember While Determining The Gender

Now you know the points of how to identify the gender of a softshell turtle. Your identification will be a lot easier if you follow some tips. For example:

In many turtles, you have seen that the incubation temperature of the eggs decides their genders. But this is not the same for the softshell turtles. The experts believe that the clutch of eggs has a 50/50 mix. This means there will be almost equal numbers of male and female softshell turtles in each batch of eggs.

Even though this theory is not proved yet, most of the experts support this logic. Check this article to learn more about a softshell turtle’s egg care.