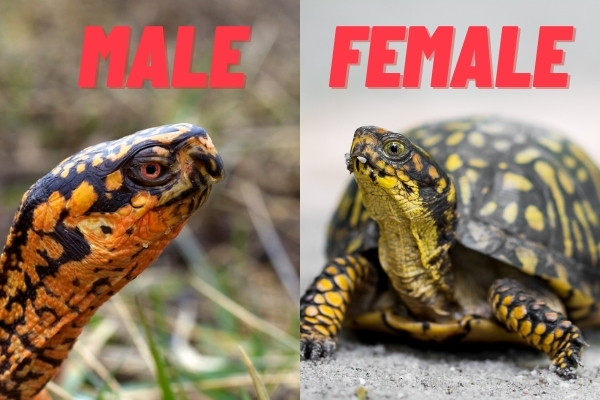 If you are a pet turtle owner, then I bet there are many times you’ve wondered if your turtle is a male or female. In this article, I’ll try to give clarification to the question how can you tell if a turtle is male or female.

Identifying the gender of a turtle is not a simple task to do. Unlike other mammals, turtles do not have any distinct sign that declares its gender such as external genitalia. It makes identifying the sex of a turtle much more challenging, but not impossible. There are some physical differences between a male and a female turtle. These differences are subtle and may require close looking to identify.

It is better if you have both a male and female turtle so that you can compare both and identify the gender easily. If you have only one turtle, then try to match as many physical aspects as possible to accurately determine the gender.

Here are the things you need to observe for identifying a turtle’s gender:

Male and females have different shells, also known as the carapace. The shell length of an adult female turtle is slightly longer than the male.

If you don’t know what plastron is, it is the underside of the shell, which covers the belly of the turtle. for observing the plastron, you need to lift up your turtle carefully. Turtles don’t like to be handled generally. So, pick your turtle by the end of the tail so that it can’t bite you. Now, calmly turn over the turtle to see the plastron.

This is a very subtle difference and hard to find. In male turtles, there is often a small notch on the back side of the carapace. The notch looks like the letter ‘v’. This notch helps to accommodate the tail when the turtles are mating.

There are some species of turtles that have gender-specific bodily features which is helpful to identify their sex. Suppose, more than 80% of the time, male American box turtles have orange or red irises and the female ones have yellow or brown ones. The dome of the females is more high, rounded whereas the male ones are short and have an oval appearance.

It is very easy to identify the sex of sun turtles. The male sun turtles have a blue shade of color on their underbellies. If the underbelly doesn’t have any blue shade, then it is a female.

6. Observe the cloaca of the turtle:

The cloaca is the vent located at the underside of the tail of the turtle. Both male and female turtles have a cloaca. The location of the cloaca differs according to the gender of the turtle.

Don’t rely on this technique alone to identify the sex of the turtle. it is not a foolproof way as the sizes of tails often overlap between a male and a female turtle.

8. Try to apply as many techniques as you can:

None of the method mentioned above is 100% reliable on their own. To get the perfect result, you need to combine as much method as you can and test them all. Try as many suggestions as you can that are mentioned above so that you can get a much accurate result.

As I have said earlier, some methods are less reliable than others. Only a combination of them will work best for identifying the sex of a turtle.

Always keep in mind that it is extremely difficult and nearly impossible to identify the sex of a baby turtle. so, if your turtle is not adult, you need to wait and try again when it is matured.

The amount of time that it takes for a turtle to be adult varies from species to species. So, research on your pet turtle species and determine how long it will take for it to be adult. You need to wait that amount of time for correctly identifying the gender.

I know it is pretty hard to find a reliable online store for buying turtles. Fortunately, I have found one for you that has a collection over 30 turtle species! Moreover, they ship with 7 Day Health Guarantee! I’ve organized their collection on this page. Just choose your favorite species and order!

Can you Rely on Eye Color?

Some people say that the male turtles’ eye has much brighter red shade than the female turtles. However, I find this very unreliable as there are many female turtle species with bright red eyes. I’ll never recommend depending on the eye color to sex your turtle.

How to Tell if a Baby Turtle is Male or Female?

It is very difficult and nearly impossible to identify the sex of a baby turtle. Most of the gender identifying tricks of turtles are applicable to only adult turtles. In case of baby turtles, these techniques fail to work. The identification will be easier if you have two different gender baby turtles for comparing. Here are some general ways to tell if a baby turtle is male or female:

How to Tell the Gender of a Red-Eared Slider Turtle?

Red-eared sliders are one of the most common species of pet turtles across the United States. When it comes to identifying the gender, red-eared sliders are the easiest one to do so. They have quite distinct physical differences between a male and female.

How to Tell if a Yellow Belly Turtle is Male or Female?

How to Identify Musk Turtle Gender?

How to Identify Mud Turtle Gender?

So, this is my detailed answer on how can you tell if a turtle is male or female. I hope this guide will help you to successfully identify the gender of your turtle. let me know if you have any questions in the comment box below.

Breeding or hatching eggs of only softshell turtles, but any other turtle species requires experience. This does not mean you can not breed your softshell turtle or hatch its eggs as a beginner. You...

Continue Reading
link to What Do Softshell Turtles Eat As A Pet?

A wild softshell turtle has to survive by collecting food on its own. So, it will pretty much eat any small fish or frog it can catch. But when it comes to the captive softshell turtles, the owner...