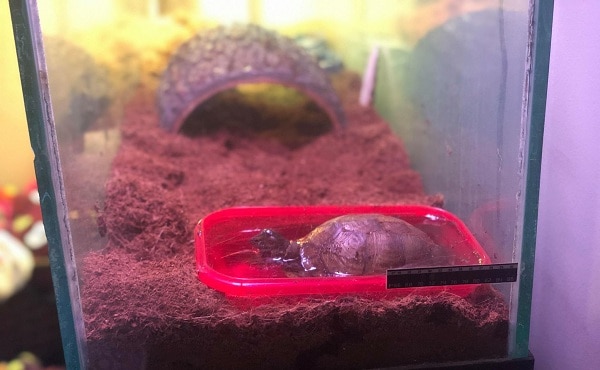 New box turtle owners often wonder whether their box turtle is able to swim or not. I’ve decided to do some research regarding this matter and find out the exact answer. Here’s what I found:

Box turtles can swim. However, they are not very expert at it and it is often advised against to make them swim.

Some additional factors are to be considered as well now that we know that box turtles can swim. If you are interested to know about the details, I’d suggest you to read along.

Which Type Of Box Turtles Can Swim?

Box turtles belong to the family and super family that traces their origin to the sea turtles and most of the box turtles hold their family line from the American Pond turtle family.

What Is The Time Duration Of Swimming?

Box turtles are not sea dwellers and prolonged exposure to water can be cumbersome and tiring for them. These specific species of turtles have small feet that are toed, meaning they do not have a distinct flap-like other water-dwelling turtles. Couple that with the large box-like shell, swimming becomes a very tiring process for box turtles.

However, it is noted that box turtles can swim from somewhere about 20 minutes to 30 minutes at a single stretch. Any more than that holds the severe chance of physically harming the creature.

Care should also be taken regarding the depth of the swimming place. Box turtles tend to drown when they get exhausted. If care is not taken, it might result in a serious health hazard or even death.

Do They Swim Underwater Or At Surface Level?

It is an established fact that box turtles are not a great swimmer. It is rather a troublesome experience which they would generally avoid. But let’s consider a scenario where a box turtle is dipped in deep water, what would happen?

Given their track record in this particular form of athletics, it is seen that box turtles would swim for a few minutes and when they would need to rest, they would rather sink to the bottom of the water than swim up at the surface level.

This poses another question, how long can box turtles survive at the bottom? Generally, it is a few minutes, nothing more than that.

However, box turtle only swims at the surface level for a few minutes before tiring out and clinging onto the side of the pot. This can be thought of as a first-time water fright, but every time, the same result was obtained, suggesting that box turtles prefer surface water in comparison to deep water.

So if you own a box turtle, it is absolutely a bad idea to drown your turtle in deep water. It should be kept limited to the surface level only.

What Is The Ideal Water Level For Box Turtles?

Every aquatic turtle of different family generally spends the majority of their life in water bodies. As part of the greater pond turtle family, the box turtles are not different as well. But since they are not a good swimmer and tires out easily, what is the ideal water level that should be provided to them?

The typical water level should not cross half the height of the shell. This ideal amount makes food intake and locomotion easier for this species of turtle.

It is to be noted that box turtles are fresh aquatic turtles. That is, they prefer to swim or feed in a clean water environment. For this purpose, the tank needs to be cleaned regularly, preferably at 3 weeks interval.

This helps to ensure that the turtle stays fine and healthy and it is not attacked by any sort of disease. The turtle stops having its food if it is confined in an unclean environment, so care should be taken duly regarding this matter.

Another question that can typically arise is what type of water is suitable for the turtles? Are tap waters harmful or not? The answer to this question is a bit intricate.

Typically, every sort of water is fine for box turtles. The species can survive and thrive in almost every water type. However, the prevalent tap water that we use in our life on a daily basis contains chlorine and other chemicals, which is not harmful to box turtles, but tends to leave white spots on their shell.

So it is preferable to use distilled water rather than conventional tap water.

It is evident now that box turtles can swim but are not very good at it. Care should be taken while handling them and even more while feeding them or leaving them to wander in deep water.

This friendly turtle is susceptible to too much handling, so it is suggested to leave them be and not to meddle too much with physical handling.