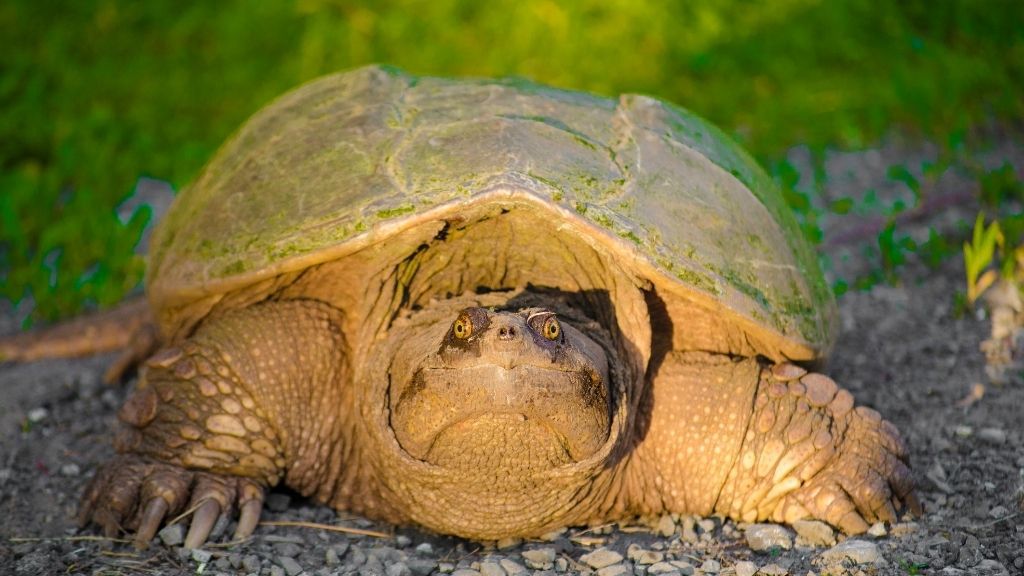 Read on to the article to explore more on the jumping capability of a snapping turtle.

Can A Snapping Turtle Jump?

Can a snapping turtle jump like a frog, a kangaroo, or a cat? The answer is no.

But yes, the species can create a thrust with the legs to move its body forward. At that moment, its body stays in the air without any contact with the ground. As the snapping turtle does not cover a long distance, many people may compare it to the lunges or hopping.

You know the snapping turtles are bigger than most aquatic turtle species. Considering their size with the heavy shell, you can not expect them to jump like a cheetah. The little distance a snapping turtle covers by jumping gives it a great advantage while in danger.

How Far Can A Snapping Turtle Jump?

Usually, a medium sized turtle has the ability to jump up to 3 to 4 inches (7 to 10 centimeters). On the other hand, the short turtles can barely make the leap beyond 2 inches or 5 centimeters. Being the master at hopping, a snapping turtle can jump higher than its body length.

The distance this creature covers with a jump may not impress you. But from the viewpoint of a snapping turtle, it is a lot.

Also, the jump length depends on some external factors. For example, a little run before shooting up will add additional force and strength to the jump of the snapping turtle.

Do you have any doubts about the running capability of a snapping turtle? Feel free to check this article.

How Does A Snapping Turtle Jump?

Look at a snapping turtle. The poor guy is weighed with a heavy shell. How does the creature even manage to jump?

Snapping turtles are quadrupedal and use all four legs to get a perfect jump. At first, these turtles get into the pre-jumping position by bending the rear legs and keeping the front legs extended. Sometimes, the turtles may keep the front legs slightly bent too.

When the snapping turtles get a good grip on the ground and a stable body position, they push their body with all force. The thrust generated with the four leg muscles aids the turtles to propel in the air for a moment.

While we humans, and animals like frogs, cheetahs can jump continuously, this is not the same with snapping turtles. These creatures can barely bend their legs. Hence, one jump takes a lot of strength and force. Hopping like a kangaroo is not something a snapping turtle can do.

Also, unlike us, snapping turtles can not jump in five different directions. These turtles can only manage to lunge forward.

If you are curious to know how other turtles jump, do check this article.

Both the answer lies in their body mass and structure. An average looking common snapping turtle weighs around 10 kgs. On the other hand, an alligator turtle has a body mass of 70 to 80 kgs.

Why Does A Snapping Turtle Jump?

Due to the inflexible body structure, snapping turtles do not jump very often. Also, jumping is negligible to these turtles because it has nothing to do with day-to-day survival.

Snapping turtles jump and move fast when they are in danger or being disturbed. Lunging 3 to 4 inches provides them a good lead and chance to outrun the opponent. Apart from this, the turtles may jump to reach a higher place.

Can Snapping Turtles Jump Out Of Water?

Snapping turtles can barely jump out of the water. To make a perfect jump, the snapping turtles require solid ground under their feet. While in water, these turtles can push their body upwards by generating a thrust with rear legs. But those small movements are not enough to shoot the turtles out of water.

To get out of the water, snapping turtles choose to climb instead of jumping. When you get a basking dock for your turtles, the experts suggest purchasing a rampage too. It is because these turtles can not reach the platform by jumping. They need a medium to climb on the basking station or land area.

Snapping turtles are natural climbers. They have the quality of a hiker. These turtles can climb fallen trees, hills, fences, and other obstacles blocking their ways.

The strong, thick, and long claws are perfect for hooking to any solid texture. Their long tails provide an extra vertical height and aid them in pushing the body upwards. You will find many videos on the internet of snapping turtles climbing fences or walls.

If you have a snapping turtle, you know very well how wonderfully the pet climbs the enclosure wall. For these turtles, an extra layer of protection is mandatory in the habitat. Otherwise, the turtle may escape the tank.

As a bulky species, snapping turtles do not run very fast. The average running speed of a snapping turtle is around 2.4 mph (mile per hour) or 3.86 kph (kilometer per hour).

The bulky body and inflexible legs are the reasons why snapping turtles can not run fast. You know, a snapping turtle grows between 8 to 26 inches and weighs about 10 to 80 kgs. And their legs are not developed enough for bending or doing quick movements.

Hence, running at a fast speed while carrying a huge body mass with tiny, undeveloped legs is not a cup of tea for the snapping turtles. However, the average speed of these turtles is not bad either. The snapping turtles easily take a lead or outrun the opponent with their average run.

Snapping turtles always run towards the water. It is because, in water, they can swim at a faster speed. Experts claim that these turtles swim at 10 to 12 mph speed. Snapping turtles adapt other defense mechanisms like biting or jumping while in danger.

Snapping turtles jump but do not cover a great distance. You may compare the jump of these turtles with a lunge or hop. However, among all the turtle species, the common snapping turtles are the champion in jumping.