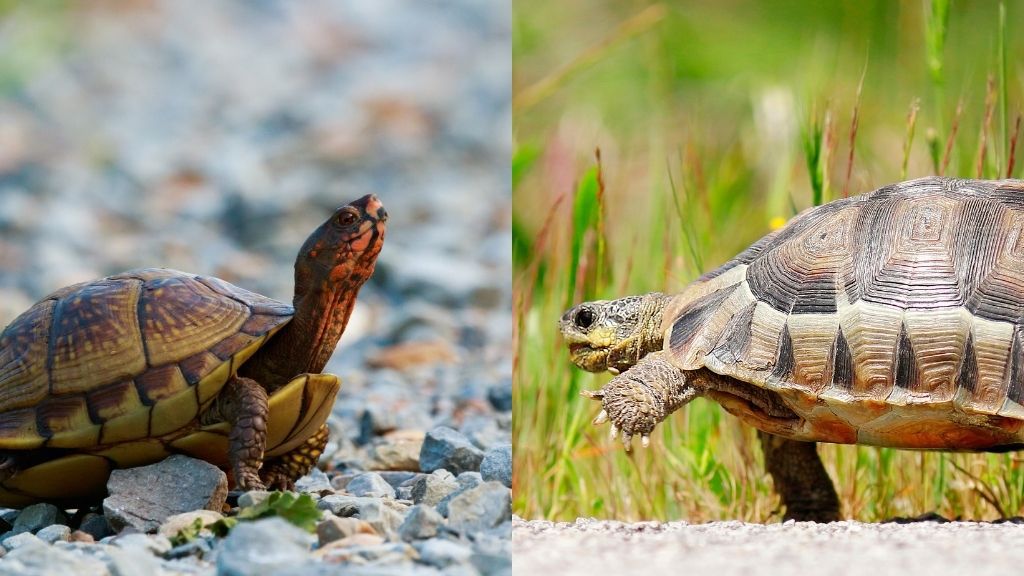 The newbies often get confused over turtles and tortoises. To make you clear, though both these creatures look similar, they have distinct differences. For example, tortoises are more land dwellers, and the turtles prefer water habitats. Do turtles and tortoises have different speeds? Are tortoises slower than turtles?

In this following article, I will discuss each factor that makes turtles faster than tortoises. If you have the slightest interest, read to the end.

Are Tortoises Slower Than Turtles? Why?

Turtles and tortoises both have reptile bodies and belong to the Chelonia order. But they have significant differences in habitat, body structure, longevity, diet, etc. Even in speed, both creatures exhibit dissimilarities. Turtles are faster than the tortoise.

Do you wonder what makes the difference between the speed of a turtle and a tortoise? I can think of 2 major factors that are responsible for the speed. Such as,

Let’s compare these 2 factors and conclude why tortoises are slower than turtles.

There is a little controversy on which one is bigger, the turtle or the tortoise. You can not say for sure as the size depends on the species. According to most experts and researchers, turtles are bigger in size.

An average turtle grows more than 12 inches. Adult turtles gain a length of around 3 to 5 feet depending on the species. On the other hand, an average tortoise is 10 to 12 inches in size. The large tortoise species grows about 3 to 4 feet.

Tortoises may grow a bit shorter than turtles, but they weigh more. The heavyweight comes from the shell. Their shells are more rounded and domed shaped than the turtles. Apart from the shell, the average weight of the turtles is less than the tortoises. Check this article for more information on turtle weight.

Some of you may wonder why tortoises can not accelerate more speed. They have a stumpy and padded field, which helps them walk easily on the land. On the other hand, turtles have webbed feet or flippers. Instead of having muscled and developed legs, tortoises are slower due to the heavy body.

You can not expect a creature running at a full speed with a heavy shield on its back. I agree, turtles are slow on land but compared to them, tortoises are slower. The main reason is their heavier shells.

Are you wondering what is the connection between metabolism and speed? Well, there is a solid link. Science proves that metabolism affects the speed of any animal or even human. For example, you have a fast metabolism system and so you can move faster. It is the same for most animals like cheetah, rabbit, etc.

You know slow metabolism has a bright side. It blesses the animals with a long life. Compared to turtles, tortoises live a longer life due to the slower metabolism. Get a list of different turtle’s lifespan by clicking here.

The average speed of turtles in water is 10 to 12 mph. On land, the speed decreased to 3 to 4 mph. Depending on the species, the speed may increase or decrease.

Here is a chart that includes a speed chart of different turtle species:

You already know tortoises are slower than turtles. But some tortoise species can give neck-to-neck competition to the turtles.

Here is a chart that includes the speed of different tortoise species:

As tortoises can not swim, all these are their walking speed.

The Fastest And The Slowest Of Two Worlds

Ain’t you curious to find out which turtle and tortoise species stand out from the rest? Among the turtles, the leatherback turtles hold the record of being the fastest swimmers. They swim at a speed of 35 kph. On land, the softshell turtles are the undoubted king. They run at a speed of around 3 mph.

There is confusion between two turtles being the slowest. The box turtle and the bog turtle, both move at a sluggish pace. They are considered slower than all other turtle species.

A leopard tortoise, named Bertie is considered the fastest tortoise on the earth. He holds the Guinness World Record of walking at a speed of 0.28 mps or 0.63 mph. Reports say that Bertie has always been fast and loves doing activities. On the other hand, the slowest tortoise is the Giant Galapagos tortoise. These creatures move at a speed of 0.16 mph or 0.27 kph.

Why Are Turtles And Tortoises Slower Than Most Animals?

Tortoises are slower than turtles, no doubt. But if you think individually, the speed of the turtles is not that great either. So, what makes both the turtles and tortoises slow?

2. Food security: Tigers, leopards, and most wild animals have to hunt for food. While turtles and tortoises can live on herbs and small fishes, insects, and worms. As they do not have to run after prey, their body and speed have evolved this way.

4. Physique: You already know turtles and tortoises can not move faster due to their heavy shell. According to records, the empty shells weigh around 5 to 25 pounds or even more depending on species. How can these animals move at a full speed with their weight on the back?

5. Self instinct: Another reason turtles and tortoises move slowly because of the fear of fall. If they move fast and have a fall, all the impact will be on the shells. It may cause crackings or shell damage.

Turtles are faster than tortoises. This happens because their shells are a bit lighter than the tortoises’. However, some tortoises can give a good competition to the land turtles in running.