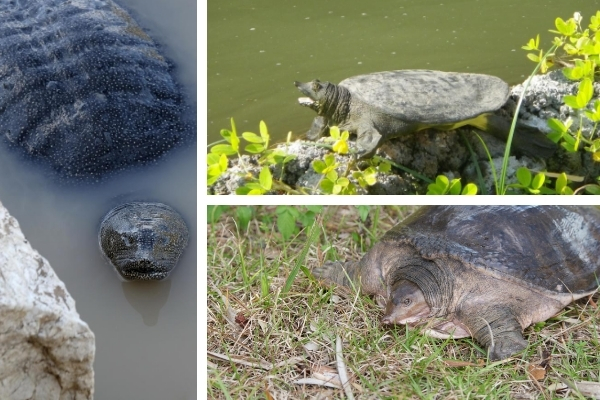 Before buying any turtle species, you need to do thorough research on them. Why? It is because the more information you can gather about the species, the better care you can offer to them. Also, if the turtle is endangered, you can take further action to save it. Here the question is if the softshell turtles are rare or not.

Yes, some subspecies of the softshell turtles are extremely rare. Such as:

I am sure you are thinking about why these species are at the edge of extinction or how to save them. If so, then give this article a quick read.

Most of the subspecies of the softshell turtles are either endangered or rare. Remember one thing. One species that is engendered in one state or region may not be rare in other countries.

Here is a chart that indicates the conservation status of the subspecies and some additional information:

From the chart, you can conclude that most of the softshell subspecies are at the edge of extinction. Some of them have become so rare that nobody has seen one in years.

Why Are The Softshell Turtles Endangered?

If you think deeply, you will find out why the softshell turtles are becoming rare. From my point of view, there are 3 main reasons behind it. Such as:

Due to the increase of the overall world population, the wild softshell turtles are losing their home. How? Imagine you have moved to a new place near the forest and within a few years, the area will be filled with shops, residents, etc. As a result, the softshell turtles around that area have to leave that place forever.

The softshell turtle population has decreased because of this habitat loss, and the species is getting rare.

Softshell turtles are freshwater turtles, and they are very aquatic. They live in the bottom of the river and barely come to the surface. So, you can understand how important the water condition is for this species.

Over the decades, water pollution has risen by certain degrees. And so, the lakes and rivers are getting poisonous for the softshell turtles. Many of the turtles have died because of the dirty water. This is a severe problem, and the main reason why the species is endangered.

Softshell turtles are quite rare and extraordinary. Some turtle owners fascinate about raising the species as pets. Just because the demand for the species is high, the black marketers are taking advantage of the situation. How? Let me explain it to you.

When you buy one softshell turtle from the shop, you expect it to be a captive breed. But as breeding can cost time, money and energy, some shops sell the wild ones. This impacts the wild population of the softshell turtles. With time some subspecies are getting really rare to find.

Besides these 3 reasons, accidents, climate change, and diseases are some other factors that affect the softshell turtles.

Why Is This Species So Important To Save?

No matter if it is a softshell turtle or red eared slider, each species contributes to our ecosystem. They play an important part in biodiversity and indicate that our environment is healthy. So, what will happen if the softshell turtles disappear?

Obviously, it will indicate that our ecosystem is falling apart. Also, this endangerment will trigger the loss of other species within the system. Are you thinking, why do you need a balanced ecosystem?

Well, we humans can not purify the environment by our own and depend on all the species living in the wild. I hope you have got an idea of why it is important to save the softshell turtles.

Can You Save The Endangered Softshell Turtles?

For some softshell turtle subspecies like the Yangtze, it is too late to take any actions. If it were 10 or 20 years back, there could be a light of hope. But don’t worry. We can still work on other vulnerable and endangered softshell turtles.

As a turtle owner or lover here are the things we can do:

Is There Any Law To Save The Rare Softshell Turtles?

The authorities have also started taking action against the illegal pet markets. However, picking up a wild turtle can be against the law too. And the administration can take action if they want.

Most softshell turtle subspecies are rare, vulnerable, and endangered. The authority can not alone fight to save the species. As a responsible citizen and turtle lover, we all should be aware of this fact. Also, we all need to come forward to make the environment a better place for the softshell turtles.

link to Are Softshell Turtles Endangered?

Have you ever wondered if softshell turtles are endangered or not? This is one of the basic questions we, turtles lovers, should care about, but we don’t. We only focus on raising the pet and do...

I have heard a lot of people saying that the Florida softshell turtles are dangerous. And many of them do not want to pet the species. If you are thinking about buying or adopting a Florida...