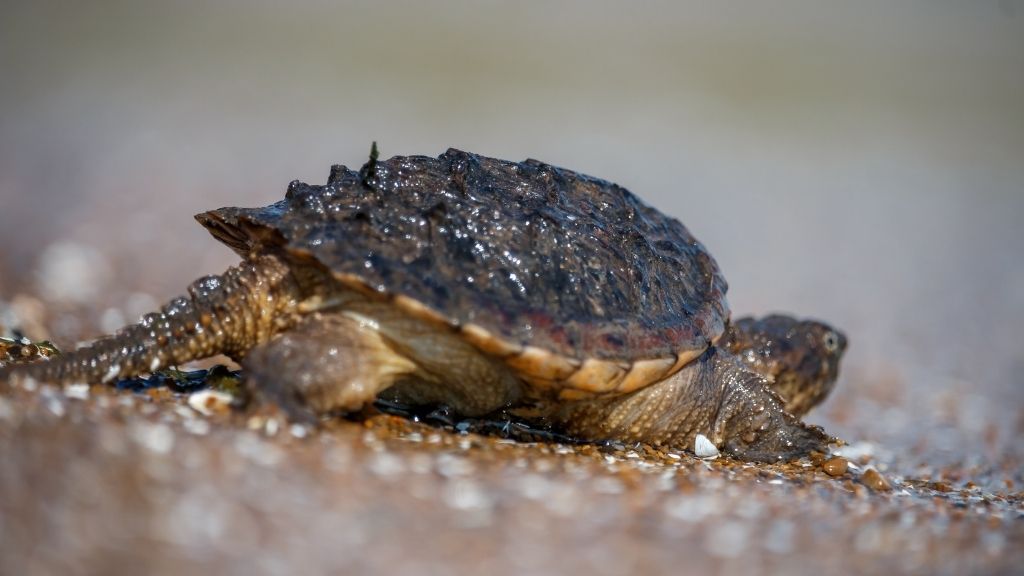 “Slow and steady wins the race.” Do you remember this famous quote from your childhood storybook? Of course, you do. For some people, turtles are the standard of slowness. Though turtles move slowly on land, in the water they multiply their speed 3 to 4 times. Do you know why?

Turtles have biological advantages that help them swim faster. For example, flippers or webbed feet. On the other hand, on land, turtles do not have to hunt for food or run away from predators. This is the reason, their legs are not muscular and developed enough for running or moving fast on land.

In the following article, I will share with you the secret behind a turtle’s speed. So, read to the end.

Why Are Turtles Slow On Land And Fast In Water?

Turtles are slow. This opinion has become more popular because of the land or terrestrial turtles. The running or moving speed of the turtles on land is much less compared to the one they gain on the water. Why does it happen? Have you ever invested a thought on this?

Well, I have researched and asked around the experts to get the exact answer. Here is the most possible response I have collected.

Why Are Turtles Slow On Land?

Land turtles, like the box turtles, are slightly different from the water ones. This dissimilarity mainly reflects on their need, moving style, diet, etc. Here are the reasons why turtles are slow on land:

1. Most land or terrestrial turtles are omnivorous or herbivorous. It means they prefer eating both animals based food items and plants. Thus, there is an abundance of food in the wild.

These turtles do not need to hunt or prey to survive. Why would you run if you do not have to? Being fast of course charges you energy. As turtles get their meals without any struggle, they have evolved to be slow.

2. Most turtles live their lives in the water. So, it is natural to have more enemies there than on the land. However, in most cases, the turtles will barely outrun the predators while under attack on land. So, how do they protect themselves?

Yes, with the natural shield they have, the strong shell they are carrying on their back. Whenever a turtle smells of danger, it will curl up into the shell and wait for a safe return. A study proves that a turtle shell can resist 200 times more weight than an empty shell. It will take a thousand-pound pressure to damage the shell.

As the shell is providing protection, the turtles do not need to boost up their speed on land.

3. Another thing that slows down the turtle’s speed on land is the body structure. You know turtles have to carry a huge load with their tiny legs. Without moving much, their leg muscles haven’t been developed well for running.

Also, turtles have a different style of walking or moving on the land. They get triangle support on their three feet. We humans and most other animals lift our feet or bodies to walk or move. It increases our speed and makes us fast. In the case of turtles, they do not lift their body much and spend energy as low as possible to move.

4. Sea turtles move sluggishly on land. It is the flippers that make it barely possible for these turtles to walk. The sea turtles come to the shores when they have to lay eggs. This is the same case for the pig-nosed turtles.

5. Another possible reason turtles do not move fast is to avoid shell injury. Imagine a turtle is running and falls badly. What will happen?

Surely, the whole impact will be on the shell. There is a high risk of breaking the bones or shell spines. If not, the dents or bruises on the shell will lead to shell infections or rot.

All the turtles don’t need to be slow on land. Some aquatic turtles actually exhibit extraordinary speed on dry land. Take softshell turtles as an example. They can move at a speed of 3 mph. This is almost the same as the average walking speed of men.

Some aquatic turtles are able to move fast on the land because of their unstable gaits. They keep switching their body balance between their front and rear limbs. So, they can easily move forward fast.

However, terrestrial turtles also increase their speed under special conditions. For example, when they have to outrun a predator or while they are after something.

Why Are Turtles Fast In Water?

Turtles are comparatively faster in water. For most species, the average swimming speed is 10 to 12 mph. Don’t you wonder how the slow turtles gain this much speed in the water?

Well, the answer hides in their physical structure. Most turtle species live in water and so, their bodies have been adapted for the water life. If you look at the sea turtles, they have got flippers. These assist the sea turtles in boosting their swimming speed.

The front flippers generate up and down movements. As a result, a thrust is produced and the turtle moves forward. However, the rear flippers are not used in speed production. Rather, sea turtles use the rear legs as steering.

On the other hand, other aquatic and semi-aquatic turtles have webbed feet and long claws. Turtles generate their speed by paddling their feet. As turtles have natural advantages for moving in water, they have a better speed there.

Some turtles are slow even in water, especially the land turtles. Some aquatic and semi-aquatic turtles like the red eared sliders also swim at a sluggish speed. The snapping turtles will avoid swimming at all costs. They prefer walking at the bottom of the water source.

Why Are Turtles Slower Than Most Other Animals?

If you look around, most animals are always in a hurry. They move faster than your cute and adorable turtle. What do you think is responsible for your turtle’s slow speed? I am not indicating any land or water turtle in particular, rather talking about the whole species.

The experts blame their slow metabolism for their speed. You already know that turtles tend to spend less energy moving. A fast metabolism will result in fast speed but will cost you your life. What do I mean?

In simple words, certain products of fast metabolism affect aging. Turtles’ slow metabolism is the reason why they live so long. Some species have a life of about 300 to 500 years. Don’t be surprised. Know the other mysterious factors behind the turtle’s long life from here.

The Fastest And The Slowest

I am sure you are curious to know which turtle species is the fastest and which one is the slowest.

The record says leatherback turtles own the first position in the swimming speed with 35 kph or 22 mph. On land, softshell turtles are the fastest and move at a speed of 3 mph.

However, box turtles have a slow walking speed of 0.25 mph. The bog turtles are even slower. They move at a pace of 0.20 mph.

Are turtles slow? Well, maybe a little bit on land but not in water. The myth about turtle’s low speed is now almost debunked. Also, what’s the problem with being slow when you can enjoy a long happy life?