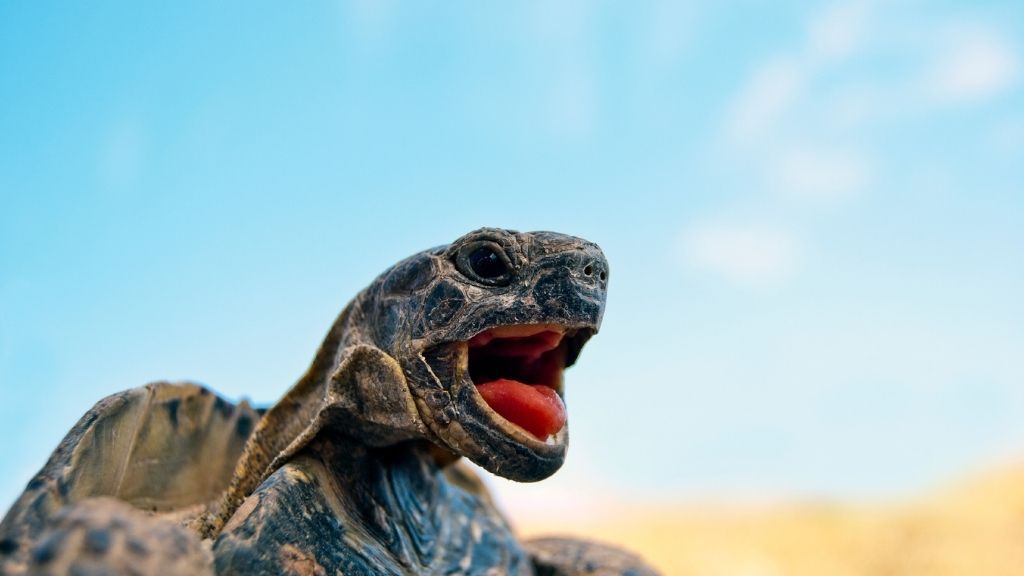 Do not get scared if you hear your turtle making sounds. I know this can be a little surprising, but yes, turtles can make different sounds. And the interesting part is, each sound either contains a message for the fellow mate or just an emotional expression of this creature.

A turtle hisses to the opponent if it is nervous, stressed, or mishandled. Heavy breathing along with hissing indicates that the turtle is in an aggressive mood. The turtles make a low frequency cry like sound while mating.

Are you wondering how a turtle can make sound without owning a vocal cord? Or why do they make a sound? If yes, then read this article to the end. Here I will discuss everything you need to know about a turtle’s sound.

What Do Different Turtle Sounds Mean?

Turtles definitely do not speak human language, still, they are able to create a handful of noises. Are those sounds meaningless or the turtles want to express their mental state? After researching for years, scientists have concluded that turtles make a distinct type of noise in a particular situation. It means the turtle chatters are not useless or meaningless. These little creatures communicate with each other and humans via those small noises.

Here are some turtle sounds with their possible meanings:

Hissing is the most common turtle sound and this species often makes a hissing sound. This sound is not as strong as the snakes’ or the cats’. Rather the turtle’s hissing is of low frequency. Turtles hiss under 3 conditions. Such as,

Hissing is an involuntary behavior of the turtles. They will create this sound when they smell fear or threat. If your pet turtle hisses at you, this means the little buddy does not find you safe. And it is getting ready to attack you.

Stress can lead to weird behavior in turtles. Hissing is one of them. A new environment, a chaotic room, overexposed to light, constant touching, or giving extra attention may make the pet stressed. And at that moment, the turtle creates the hissing noise to express its ongoing state of mind.

You already know that turtle hissing is not the result of their vocal cord. But this sound is created when the pet tucks into its shell and the extra air leaves the place. Some claim that the hissing sound comes from the lung air of the turtle when it withdraws its body into the shell.

The hissing sound is a warning or message of threat for other fellow turtles. Turtles may also hiss while mating.

No, the turtles do not sing. A study has found proof of vocalization during breeding season among the American snake necked turtles. These turtles will create sound in a burst of rhythmic beats. The rhythm sounds like a cardinal signing.

Hissing with heavy breathing indicates the aggressive mood of the turtle. The snappers are well known for making this sound before attacking the opponent. More or less all the turtle species exhibit this type of vocalization while getting angry.

In captivity, the turtles often get aggressive if they do not get enough space to move, enough food, or a suitable environment. If your turtle is hissing along with heavy breathing, leave it alone for a moment. Keep other pets away from it. Then take action to fix what is bothering the turtle.

You know turtles do not have ears, right? The interesting fact is that the embryos of sea turtles develop enough ear to hear any vocalizations at a short distance before their hatching time. The researchers have observed leatherback sea turtle eggs for a long time. They have noticed that just before the hatchlings come out, they create a grunt, chirp, or hybrid tone.

Scientists claim this is a way of communication for the hatchling. They probably signal each other about the time of leaving the eggs. This communication helps the babies coming out of the nest at a large number. The researchers also noticed that the sound changes after some hatchlings come out breaking the eggs.

This is weird but true. The female leatherback turtles come to the seashore for nesting. At that time, they are found to make this unladylike noise, which is similar to human burping.

Yelping is the natural behavior of dogs. They yelp when in pain. This is a sudden, short, yet high pitch sound. Not all the turtle species yelp. The giant musk turtles are observed to create this particular noise while under attack or they are startled.

I am not talking about chickens. Turtles and tortoises sometimes cluck like chickens, especially when they are looking for mates in the breeding season.

Turtles are no birds but yet they can mimic the chirping sound. As turtles do not have vocal cords, they create this sound by rubbing the upper beak with the lower beak. This is called stridulation. No one knows exactly why a turtle does it. But most turtles including the box turtles and red eared sliders happen to chirp sometimes.

Trust me if your turtle whistles just like us humans and with a closed mouth, then it is not good. The whistle is a sign of respiratory illness in turtles. Look for white residue on the neck, mouth, or nose discharge, breathing symptoms, and change in appetite. You should take the pet to the vet as soon as possible.

While mating, most turtle species do a low frequency sound, which is more like a continuous cry. You can not describe the exact sound until you hear it by yourself. This is more common in large turtles. Experts claim that the map turtles also generate a low frequency sound while mating. But it is inaudible to humans.

Though the turtles can not mimic the exact roar, their vocalization is the poor version of it. The big headed turtles make a sound similar to roaring when they sense a threat. This vocalization is to scare off the predator or opponent and self defense.

The scientists have evidence that the Arrau turtles, or the giant amazon river turtles, communicate with each other with this type of echolocation.

This is their way of announcing communal nesting. Also, while going back to the river, they will do the same.

You know most of the turtle sounds are not audible to the turtles and a high powered hydrophone device is required. Here a low pitched sound evidence the scientists have found:

You know turtle hatchlings make a distinct sound before coming out of the eggs. These babies do the same after coming out. But this time, they vocalize to seek the attention of any female adult turtle.

The babies are most vulnerable and exposed to predators. This low pitched sound travels a long way underwater and the female adult turtles seem to respond to this vocalization.

How Do Turtles Make Different Sounds?

Turtles do not own vocal cords and external ears like us humans, and some other animals. This is why scientists had assumed this species as deaf and mute for centuries until recently. A team of researchers has found out that turtles can create noises.

But how do turtles make sounds without vocal cords? And why can’t you hear them creating noise so often? Scientists claim that the turtles make unique sounds by swallowing or forcing air out of their lungs. Also, the excess air leaving their shells can create a hissing sound.

You probably are wondering why we can’t hear the turtle chatter. This is because turtles communicate with each other at a low frequency just like the whales. You know low frequency sounds can travel a longer distance. So, for underwater communication, this is the best way for the turtles.

Human ears and brains are not programmed to collect and process low frequency sounds. To hear the noises, a powerful hydrophone is required. The researchers experimented for 8 straight hours and heard only 15 to 20 turtle sounds.

Though most turtle chatters go unheard by humans, still some sounds are within our audible ranges. You can hear a turtle hoot, cluck, hiss, chirp, and so on.

Why Do Turtles Make Sound?

You already know many reasons why a turtle vocalizes. They do it to express their mood and to communicate with each other. Usually, a turtle does not make much noise. But if the pet is creating noise more often, then you should look into the matter.

In most cases, we humans can not hear their sound as they are in low frequencies. The hatchlings vocalize communal digging and seeking out help.

The hissing definitely indicates your turtle is pissed and something is wrong with your care. Also, the whistling sound is the warning of respiratory infection. To know your turtle and provide it better care, you must pay attention to these little things.

Do Turtles Communicate With Humans?

As turtles do not have vocal cords, they can not express their feeling the way cats or dogs do. But still, the turtles do what is in their position. A new turtle will hiss at you more often. But with time, when it gets familiar with you, the hissing will become rare.

Sometimes, the turtles knock on the tank glass seeing the owner. It indicates that the pet is happy and now is the time for food or treat.

Until recently, people had this misconception that turtles are deaf and mute. Indeed, they do not own a vocal cord or external ear. But they have a thick membrane in the inner ear, which works fine, despite having an external opening.

The scientists suggest turtles have decent hearing power. They can hear the low pitched sounds below 1 kHz. Also, like many other reptiles, turtles do not hear in the air. They have a better hearing ability in the water.

A turtle really does not need to vocalize that much like us humans and most other animals. Still, their ability to communicate in a low frequency sound or creating noise with the body is really appreciable.