In North America, anyone who loves water or kayaking must have encountered painted turtles around the water. For fifteen millions of years, they are successfully dwelling on this planet. They are still growing strong. They are highly adaptable, don’t wonder if you see a bale of them around your golf court.

Painted turtle has got four different subspecies spreading all over North America.

Let’s know the name and some details of the subspecies- 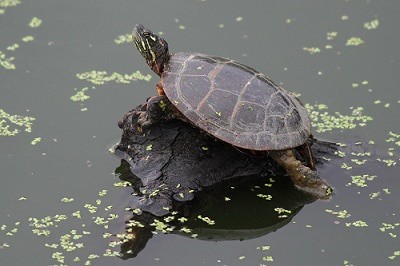 Eastern painted turtles are about 4.5 to 6 inches long. They love to live in ponds. These turtles are widely found in the Appalachian Mountains. They are also found in South Carolina, North Carolina, and Georgia too.

The color of the carapace can be olive to black. There is red or yellow border on the shell marginal. Their plastron is yellowish.

Eastern Painted turtle mostly eats dead or injured fish in the wild. They always eat underwater. Rarely we see them eating on land. 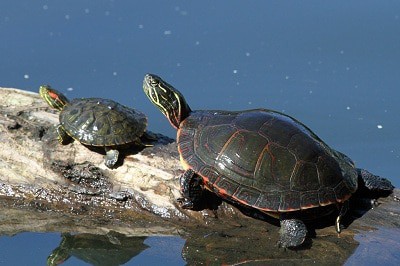 Midland painted turtles get up to 5 to 9 inches. The carapace is slightly smooth and doomed than other painted turtles. They have got a unique yellow horizontal line in their eyes that goes through their pupil.

The Midland Painted turtle got light green to blackish color. They have got red lines on their forearm. On their head, they got yellow lines that go all over their face, mouth, and nose. 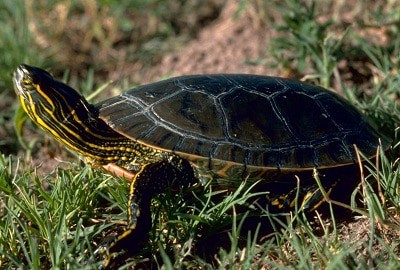 The Western Painted Turtles are the largest in comparison with the other subspecies of the painted turtle. A western painted turtle can get up to 10 inches long.

Vibrant and colorful western painted turtles got black to olive skin along with yellow and red stripes on their tails, legs, and neck. There is a distinguishable yellow streak behind their eyes.

Interestingly, western painted turtles got few thick yellow lines on their chin, all of those lines meet at the tip of the jaw.

In Canada, they are mostly found in British Columbia, western Ontario and across southern Canada.

Western painted turtles usually eat any available animals and plants according to season. 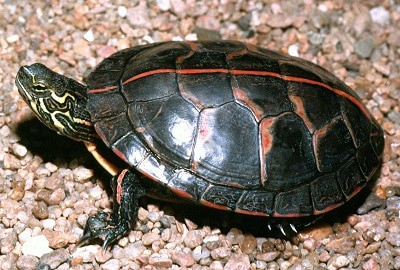 A red stripe runs on the middle of the shell from top to bottom that makes them very attractive and easy to identify.

Southern painted turtles eat plants and animals. Interestingly their eating preference change according to their age. The juvenile southern turtles mostly eat animals than plants whereas the adults eat more plants than animals.