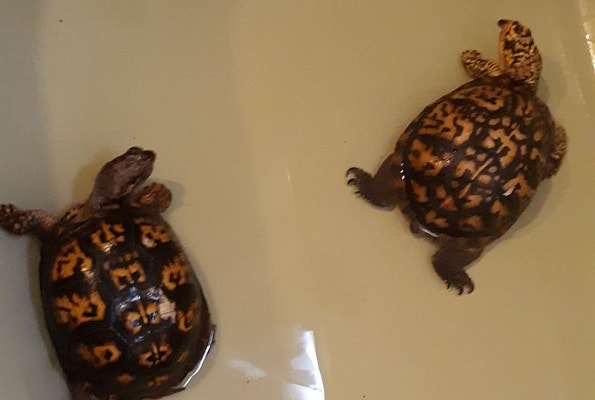 Turtle owners often adopt more than one turtle at a time. Housing all the turtles together is challenging. Most of the box turtle owners, both new and old, frequently ask a common question: Can multiple box turtles be housed together?

It’s a tricky question, and the answer can be both yes, and no. By analyzing most of the cases, I prefer to say that you can house multiple box turtles together.

If you are confused about the housing of your box turtles, this is just the article you need. In this article, I will discuss the pros and cons of housing multiple box turtles together, and some other topics related to it.

Box turtle is not like other turtle species. We know that box turtles prefer solitude.  They live alone in the wild and prefer the same in a captive situation. Most of the time, they tend to avoid companionship. But it does not mean they are aggressive creatures.

Box turtles are very friendly with each other even though they prefer solitude. So if you keep more than one turtle together, it can be fun for them. Keep in mind that some of its subspecies do not prefer companionship at all. In that case, you can not force your box turtles to stay together.

Are There Any Particular Conditions For Housing?

There is no condition at all. But age and subspecies matter a lot if you are thinking to house multiple box turtles together.

A study shows that immature box turtles are more friendly than the adult ones. So you can house them together without any effort. As long as they are about the same size and species, they will not be aggressive to each other.

As soon as the baby box turtles start growing, they start bullying each other. It can be a difficult task for you if all your box turtles are young.

Adults are trickier than these two groups. They can be very aggressive with each other. Even any of your box turtle can be injured if they get into a fight.

Here are some guidelines that might help you to house multiple box turtles with less effort.

There are two cases when you should not house two box turtles together.

Can You Reduce The Chance Of Fighting?

If you keep multiple adult box turtles together, then fight is unavoidable. Most of the time, turtles compete for food, light, or other resources. So if you provide a sufficient amount of food and other things, you can avoid the fight.

Here are some other tips you can follow to reduce the chance of fighting.

There is no guarantee that these tips will work on your box turtle. Many people have found these helpful, and you can apply them to see the results.