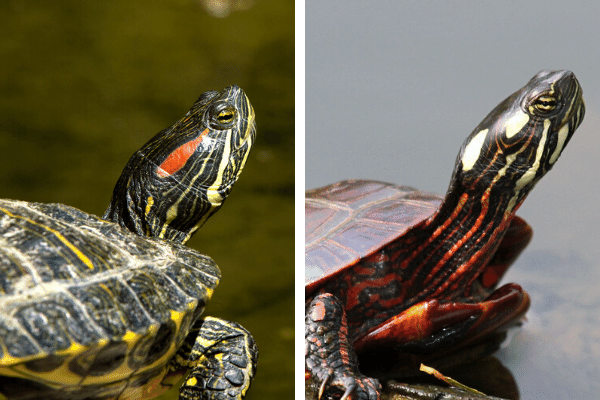 While buying pet turtles, people often get confused between red-eared sliders and painted turtles. I remember a few days ago, one of my friends was asking about the basic differences between these two turtles.

Red-eared sliders and painted turtles are commonly kept as pet turtles. They both follow lifestyles and requirements. If you want to keep either of them, then it is necessary to know the differences between these two species.

Both the red-eared slider and the painted turtle are very similar physically. But, from the given differences you can tell what the variations between these two turtles are.

Even though they have dissimilarities physically, they have a lot in common. As their habitat, lifestyle, and diet are the same, maintaining them together is quite easy. They are very compatible as tank mates.

However, I recommend, you should observe their behavior by putting them in the same tank for a while. In case of any hostile behavior, put them in separate tanks.

So, you got an idea of how red eared slider and painted turtle are different from each other. Although there are very minor differences between these two turtles, both of these make a great pet.

Bringing a turtle home means you are adopting it for almost a lifetime, therefore, it is essential to know about the background of your pet turtle.

link to How Fast Can A Snapping Turtle Run?

Snapping turtles are considered aquatic due to their fondness for water. These creatures are hardly seen on the basking dock with their moderately bulky bodies. It can make you wonder whether these...

The myths about a turtle’s speed have not lost their popularity yet. People believe turtles are anything but not made for a sprint. Rather, they are more of a marathon material. Is this true? Can...