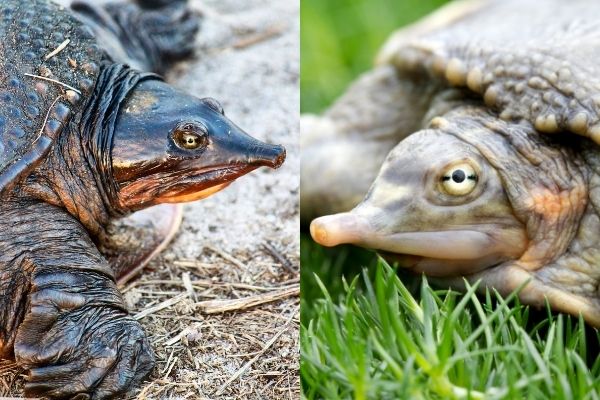 Softshell turtles are an aggressive species. Their rough behavior often makes it difficult to raise any other small aquatic animal with them. If you have a turtle of this species, you must have questioned yourself, “What are the ideal tank mates of softshell turtles?”

I am sure you have many questions on your mind. For example, can softshell turtles live with other fishes or turtles? If you have the slightest curiosity, then continue reading this article.

Can Softshell Turtles Live With Another Small Species?

Well, when it comes to tank companions, you can either put fishes or another turtle with your softshell turtle. But I personally do not encourage people to raise another aquatic creature with the softshell turtle. Even most experts believe, putting another small animal with a softshell turtle will turn your aquarium into a mess.

Let’s think about it logically. The softshell turtles are voracious species. They are carnivorous, and meat or fish is one of their favorite dishes. What do you think a softshell turtle will do after getting its favorite meal inside the same tank?

However, some people claim that you can raise other turtles or fishes even with adult softshell turtles. They believe not all softshell turtles act aggressively. Also, the big and fast-moving fishes can live in the same enclosure as them.

I have mentioned earlier that it is not a great idea to put fishes with your softshell turtles. These turtles are primarily carnivorous and so they can end up eating those fishes. You can obviously put a big, fast-moving, and sharp fish in the enclosure, in that case, your pet turtle may get injured.

As softshell turtles are aggressive species, you might think that they attack the fishes. But that is not the case always. Sometimes, the fishes swim around the turtle and irritate them. And eventually, the softshell turtle bites or attacks the fish.

If you want to raise softshell turtles and fishes in the same tank, you have to consider the tank size. You can not put both these creatures in a congested space. If you do, one party will get severely injured.

Softshell turtles can get 25 inches big depending on the species. Check this article to know how big a softshell turtle can get. For healthy growth, a baby softshell turtle requires a tank of 20 gallons and the young or adult ones need an enclosure of more than 40 or 75 gallons.

When you are adding fishes in the same enclosure as the softshell turtle, increase the tank size. Most experts claim that if the tank is about 125 gallons or more, these turtles can live with any big and fast-moving fishes. In that situation, the big tank will resemble a small pond.

There is another option open for you. You can build a 500 gallon outdoor tank for the softshell turtles and fishes. In that case, you will have almost no restriction in choosing tank mates for your softshell turtle.

Actually, fishes and softshell turtles can live together if both parties act gently. But as you can not predict the behavior of the turtles and fish, you should not take the risk of raising them in a single enclosure.

Softshell Turtles With Other Turtle Species

People are also confused about this topic. Some of them believe softshell turtles can live with other hard-shell turtles only if both parties are on their good behavior. On the other hand, most experts claim that putting softshell turtles with a hard shell one will only cause damage. So, what is the truth?

Well, softshell turtles are an aggressive species. They feel vulnerable because of their soft shells. When you put them with a hard shell turtle, they will feel insecure most of the time.

However, the hard shell turtles can also act aggressively. If somehow they attack a softshell turtle, the pet will be badly injured. Wounds on the softshell turtle’s shell can lead to shell or skin rot.

But it is possible to raise softshell turtles with other turtle species. You just need to take care of the space. Usually, you need a minimum of 40 to 75 gallon tank to raise a softshell turtle depending on its size. So, if you want to put another turtle in the same enclosure, increase the tank size by 20 gallons. Also, build several hiding places so that the turtles can protect themselves.

Basically, the softshell turtles do not dare to fight with the hard shell ones. So, they kind of maintain a distance. Large space with maximum visual barriers is the key to raise softshell turtles with other turtle species. Also, you have to provide enough food for all the turtles.

By following these tricks, you can raise the following turtle species with a softshell turtle:

Many people have been successfully raising softshell turtles with other species with the tips. But no one can guarantee the health protection of your softshell turtle. That is why try to provide the softshell turtles a single enclosure rather than putting them with another turtle species.

What Are The Ideal Tank Mates Of Softshell Turtles?

Check this article to get more information on the ideal tank mate of a softshell turtle.

How To House Multiple Softshell Turtles In A Single Enclosure