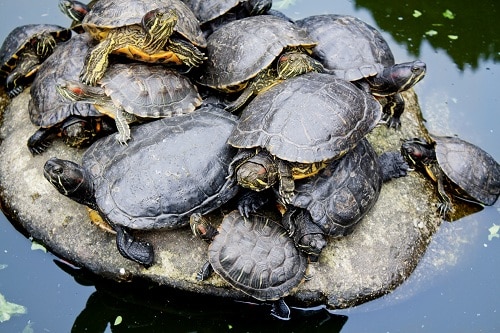 Red eared sliders like to brumate in the winter. Turtles that live in the wild also usually brumate during the winter months.

So, how long do red eared sliders brumate? Usually for 3 to 4 months during the winter season, and sometimes longer if the cold weather does not change.

Red eared sliders live in lots of different places where it can get very cold during the winter months. Even as pets, they do not lose the ability to brumate. But for them to brumate, certain conditions need to be fulfilled. If you are a pet owner, you should know about these conditions if you want your red eared sliders to brumate.

Pet turtles usually brumate when it is cold outside. As they are mostly housed indoors where the temperate can be controlled, it does not get too cold for them to start to hibernate. It is a very common occurrence for pet turtles to brumate.

As red eared sliders are very sensitive to subtle temperature changes when winter arrives, the temperature inside the house falls and the turtles take this as a sign that winter is coming.

Thus, they reach a state of brumation but because the temperature inside the house does not drop sharply, they never reach the state of hibernation as it is not required.

If you want your turtles to stop brumating, you need to ensure that the temperature of its tank and enclosure is high enough.

In the wild, it is very hard to find reliable sources of food, especially during the colder months. Thus, red eared sliders have developed this state where they don’t need to look for food or water to survive.

They take a break until the winter is over and things return to normal.

What Happens When A Red Eared Slider Brumates?

During this state, red eared sliders will do very little physical movements and will try to conserve their energy. If you find your pet turtles not doing anything, then this means that they are brumating.

When the turtles start to brumate, their heart rate slows down along with the rate of breathing. They eat very little food, and at other times they eat nothing. During this state, they do very little physical movements.

Brumating turtles will not look for any food or water, they won’t bask, and most of the time they will just move around and do nothing else. Sometimes, you will even find turtles that are brumating to be just stuck in the same place for hours and hours.

Brumation is the state which the turtles reach when their surrounding temperature is low, but not too cold that they would need to hibernate. Nothing much can be said about this state other than turtles not doing anything. It is a state just before hibernation, and it also helps them to cope up with cold weather.

When it starts to get cold, turtles will become less active and slow down their rate of metabolism. This results in a drop in heart rate and they will slow down their movements as well as other functions inside their bodies.

This slowdown in heart rate helps red eared sliders to survive with less oxygen. Even in situations where they have no access to oxygen, they can survive for 5 to 6 months. Turtles can even live without any food or water for up to 8 months while they brumate. Their cold-blooded nature also helps them to conserve energy as they don’t need to generate their body heat.

Turtles vs Other Animals While Brumating

Turtles are reptiles, which are unlike other animals that brumate because they are mostly mammals. Belonging to a reptilian species mean that red eared sliders are cold-blooded animals.

Cold-blooded animals are unable to generate their body heat and they depend on the temperature of their surrounding environment to get heat. Thus, red eared sliders are able to detect subtle temperature changes in the environment.

Other animals that brumate are usually warm-blooded animals which means that they spend energy to keep their bodies warm. As red eared sliders are cold-blooded reptiles, they have to be very careful regarding the location in which they choose to brumate. If the location is too cold, it might affect their body temperatures. Thus, being a cold-blooded reptile has its perks and disadvantages.

Side Effects of Brumation

When the turtles brumate, they slow down their metabolism to such a rate that it allows their bodies to build up more lactic acid. Brumating turtles fail to get rid of this excess lactic acid, which results in sore muscles. Thus, this side effect causes them great discomfort, especially when they wake up after a long sleep only to suffer from painful muscle cramps.

Brumating turtles are also not able to grow. This is because they require magnesium and calcium for their growth, elements that they will use to get rid of the lactic acid while they are in a state of brumation. This is another bad side effect, and growth is pivotal for their survival as the bigger the turtles get, the higher their chances of surviving from predators in the wilderness.

Where Do Red Eared Sliders Brumate?

Turtles will usually brumate near fresh bodies of water, or in places that are well hidden from the surrounding environment. They will look for a spot that will allow them to keep sufficiently warm during their brumation.

Red eared sliders usually prefer to brumate underwater. In circumstances where they don’t have this option, they will try to locate other places where they are protected from the cold weather. Once they find a place, they will brumate until the winter months pass by and then they will come out of their spots.

Red eared sliders that are bred in captivity will also brumate if their surrounding temperature gets too cold. Pet turtles need a suitable location to brumate, and if you fail to provide sufficient habitat for them, they won’t go in brumation. Most tanks that are used to house pet turtles are not a sufficient location for brumation.

Is Brumating Harmful For Turtles?

If you are a pet turtle owner, you should not be worried if you see your turtles not moving much or doing anything. It just means that they are starting to brumate and you don’t have to feed them anything.

As red eared sliders are sensitive to temperature changes, they will immediately notice the warm temperature and snap out of their state of brumation. Young turtles stop their usual growth rate when they are brumating as they eat very little food or water.

The table below lists some of the distinctions between brumating turtles and hibernating turtles.

In conclusion, there is nothing wrong if adult sliders are brumating. Brumating depends on the temperature of the surrounding, and if your place is going through a patch of bad weather, then it may prolong the state of brumation of your pet sliders.

As soon as the winter passes by, turtles will detect the temperature change and snap out of their state of brumation.