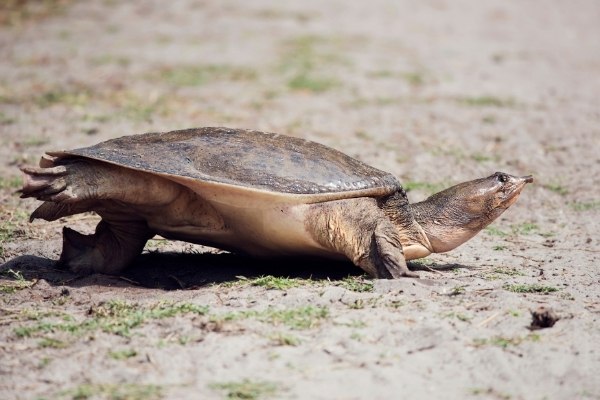 Do you want to know the science behind a softshell turtle’s rapid swimming? Or how can they run this fast? Well, if yes, then give this article a read.

How Do Softshell Turtles Swim Fast?

Turtles are slow. That is what we have learned from our childhood. This is true for many turtle species, but not for the softshell turtles. This species is one of the fastest moving freshwater turtles.

Though the exact speed is not recorded anywhere, many experts have supported the claim. In the above video, you can see a softshell turtle running fast towards the water. It takes the turtle 4 seconds to totally disappear from human sight. Can you imagine the speed now?

Many researchers claim that a softshell turtle can swim at a speed of 15 miles per hour. If you think about it, this is really fast. You can question how a softshell turtle swims this fast in spite of having a bulky body. What is the science here?

Some professionals compare them with stingrays because of the soft shell and speed. The secret to their excellent speed lies in their feet. The strongly webbed feet help the softshell turtles to propel through the water at an excellent speed.

So, the softshell turtles can swim very fast in the water using the webbed feet and flatten shell.

How Fast Can A Softshell Turtle Run?

So, when it comes to running, these turtles move their muscular legs very fast. As the shell is not hard, they have a lesser weight to carry. Again, the three claws in the feet provide them a really good grip. This is how a softshell turtle runs very fast.

Advantages Of Having The Rapid Speed

Now you know the softshell turtles can run and swim very fast. But does this speed benefit them in any way?

Whenever these turtles get attacked by a predator, they run for life. The softshell turtles can move fast in both water and land. This is a huge advantage indeed.

The rapid speed not only helps the softshell turtles with self-protection but also with hunting. You know that the wild softshell turtles have to live on the small water creatures to survive. These turtles bury their bodies in the mud and wait for the prey.

When a fish or frog passes them, they trap them using their fast moving speed. So, in a sense, the softshell turtles depend on their fast-moving speed for survival.

A softshell turtle can move on the land at an average speed of 3 miles per hour. When it comes to swimming the speed gets way better. Rapid speed is their way to adapt to the wild environment.