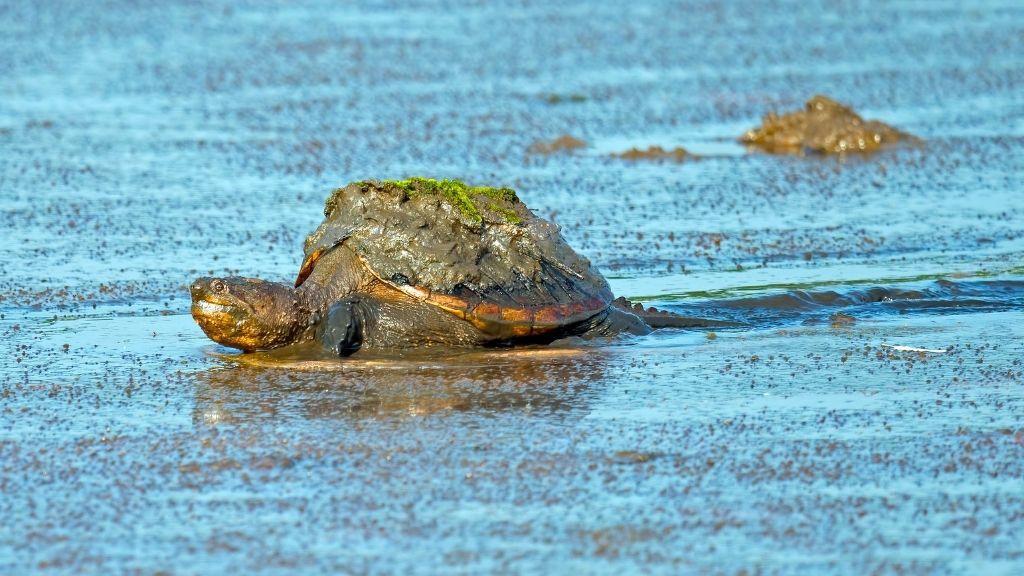 Snapping turtles are considered aquatic due to their fondness for water. These creatures are hardly seen on the basking dock with their moderately bulky bodies. It can make you wonder whether these aquatic turtle species are compatible with walking on the land or not. If yes, then how fast can a snapping turtle run?

Due to the huge physique, the snapping turtles run at an average speed of 2.4 mph (Mile per hour). In water, this speed boosts up to 10 to 12 mph.

Curious to know more about a snapping turtle’s speed? This well-informative article will surprise you with amazing snapping turtle facts. So, do read to the end.

How Fast Can A Snapping Turtle Run?

Let’s clear one thing first. Some of you may not compare the slow movement of turtles to running. But the experts conclude that turtles can run. It may not be as fast as other animals. But considering their physique, the fast leg movements are similar to running.

As per records, the running speed of a snapping turtle is around 2.4 mph or 3.86 kph. Usually, these turtles travel at a lesser speed than this. Are you wondering why snapping turtles are slow? Well, here is your answer.

If you have ever seen a snapping turtle, you know they are big in size. Depending on the age and species, a snapping turtle can grow between 8 to 18 inches or more. The average weight of these turtles is 10 kgs. Do you think a sprint is possible with this bulky body?

You know the physique is the major reason that hampers turtle’s speed. There is no exception in this case. The snapping turtles own webbed feet and long claws. Even though their legs are well adapted to swim in the water, they can not reach up to a good speed on land.

How Fast Do Snapping Turtles Bite?

Do you know the story of how snapping turtles got their name? Well, one good guess will be because these turtles snap.

If you notice the snapping turtle’s body, it has a short plastron. Thus, total hiding or tucking inside the shell is impossible for it. The snapping turtles tuck their necks next to their shoulders by bending them horizontally. As you know, the exposed necks are the easiest to attack for predators.

To fight all these disadvantages, the snapping turtles have been adapted to great biting speed. According to a source, snapping turtles strike at a rate of 174 mph or 280 kph. This is closer to the speed of an average racing car. Isn’t it amazing?

As these turtles snap within a blink, they have been named snapping turtles. Better maintain a safe distance from the snapping turtles on land. Or do not disturb them on purpose. There are medical reports of a snapping turtle biting off a human finger.

How Fast Can A Snapping Turtle Swim?

The webbed shape feet are the main reason why the snapping turtles swim fast. The front legs generate thrust to move forward in the water. The rear legs work as the steering. Also, the shells are biologically engineered in such a way that they can assist in swimming.

You can learn more about why turtles are fast in the water but not on land by clicking here.

Advantages Of Snapping Turtle’s Having A Better Speed

On one side, the snapping turtle’s speed on land is not so great. The slow metabolism, heavy shell, tiny legs compared to the bulky body, all of these are responsible for these turtle’s speed.

The slow speed on land works in the favor of the snapping turtle. It reduces the risk of having shell damage by falling. Their striking speed is better than most other turtle species. This assures their safety from most predators on both land and water.

However, the snapping turtles are really fast in the water. Whenever attacked in the land, these turtles run towards any water source. There they can get a grip of better self-defense and speed.