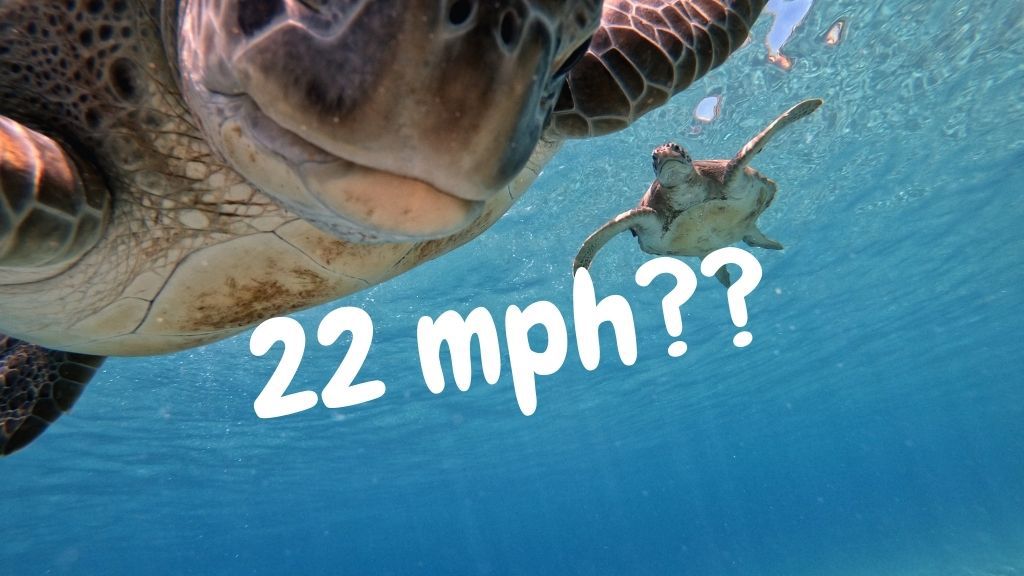 When it comes to swimming, turtles are way ahead of the tortoises, especially sea turtles. I know the speed of any turtle species is nothing to boast about. Still, you can not ignore their swiftness and mastery in swimming. So, how fast are turtles in water? And how fast can a sea turtle swim?

What makes the sea turtles faster than the aquatic and semi-aquatic turtles? Or why do these turtles cruise at a slow speed?

If you are thinking the same questions, then give this article a read. I will include the swim speed of different marine turtle species with the scientific explanation of their speeding mechanism.

How Fast Can A Sea Turtle Swim?

Most people have the wrong image of sea turtles swimming fast in the open ocean. Well, the actual case is quite the opposite.

Sea turtles prefer to swim in a slow, leisurely manner. For example, the green sea turtles cruise at 0.9 to 1.4 mph. But when it comes to swimming, these turtles speed up.

Do not take the cruising speed as the maximum ability of a sea turtle. The species can accelerate their movement multiple times while under attack. For example, leatherback sea turtles can swim at 35 kph or 22 mph speed.

Swimming speed is different for different sea turtle subspecies. If you ask me an average range, the answer will be 1.9 to 6 mph. However, sea turtles may move at a slower or faster pace depending on their mood or condition.

Here I am adding a speed chart of different sea turtle subspecies for your better understanding.

Are you struggling to identify sea turtles? If yes, then check out this article.

Sea turtles are not a big fan of fast swimming. They prefer cruising in the sea at a speed of 3 to 10 kph. But it does not imply the sea turtles are slow. While in danger, these turtles can accelerate their movements to 35 kph or 22 mph. The speed is undoubtedly fast.

If you compare the sea turtle speed to any other aquatic or semi-aquatic turtle species, the marine turtles are always one step ahead. The fastest aquatic turtle is the softshell turtle, with an average swimming speed of 3 mph.

Turtle species like red eared sliders, painted turtles, box turtles, or mud turtles can not beat the speed of a softshell turtle. Experts believe the soft shell and unique body structure are the secrets of the fast speed of this species. Get more details on a softshell turtle’s speedy moves by clicking here.

So, when it comes to turtle swimming, sea turtles are the unclaimed champions. But what do you think makes the sea turtles so fast? Find your answer in the next section.

Give this article a read if you are curious to know the swimming speed of different aquatic and semi-aquatic turtles.

Why Can Sea Turtles Swim Fast?

Sea turtles own flippers instead of webbed feet. Flippers enable these creatures to paddle faster and move quickly underwater. Besides, the streamlined and hydrodynamic shells also aid the sea turtles to propel through the water.

The sea turtles are not fast swimmers in most cases. But yes, the species have all the potential necessary to speed up the swimming rate. Also, compared to other freshwater turtles, marine turtles are definitely faster.

You already know the flippers and streamlined shells are the secrets behind the sea turtles’ fast swimming.

Of course, the strong flippers instead of the webbed feet benefit the sea turtles in swimming. But there are more reasons why a sea turtle can swim faster than freshwater turtles.

For example, sea turtles can not retract their four limbs inside the shell. I know it might sound unusual, but the legs are attached outside in the shape of flippers.

Also, if you look at the shell of the sea turtles, it is definitely different from that of the freshwater turtles. The streamlined shells minimize the water force and friction. As a result, the turtles can move rapidly without any hassle.

Are Sea Turtles Faster On Lands?

Many of you may not be impressed with the swimming speed of a sea turtle. Well, do not be disappointed to know that these turtles are even slower on land.

You know sea turtles have flippers and not webbed feet. Though the flippers are great for propelling through water, these body parts do not come in handy while taking a stroll.

Recently, a video of a leatherback sea turtle went viral. The creature was trying to make its way back to the sea from the beach with slow baby steps.

As the sea turtles do not have proper feet, they drag their bodies and call it a walk. In the nesting season, the gravid sea turtles struggle to find a suitable spot for depositing eggs. It is not easy to drag the bulky weight all over the sandy shore.

Many mother turtles give up the search for a nesting spot and return to the sea. It is because the struggle to move on the beach with flippers is unbearable sometimes. The phenomenon is called false crawling.

Compared to the sea turtles, the semi-aquatic and aquatic turtles move faster on land. Get full details on their speed from this article.

How Far Do Sea Turtles Swim?

You already know that sea turtles prefer cruising other than fast swimming. But yes, these turtles can swim faster in certain situations but not for long hours.

These turtles will accelerate their speed whenever they sense danger. Once they are out of the situation, they will swim at their average speed. How far do you think sea turtles can travel at such a slow rate?

Surprisingly, sea turtles can swim great distances. These turtles have to travel long distances during their lost years, mating season, feeding, and nesting. Click here and get the visual infographic on the sea turtle life cycle.

Sea turtles obviously can not travel long distances with only one dive. You have to consider their breath-holding capabilities. Experts claim that a sea turtle can hold its breath for 4 to 7 hours straight.

What happens if a sea turtle runs out of breath? It drowns.

Sea turtles are not fast but powerful swimmers. They prefer to move around at a slow pace and collect food. But while under attack, the turtles boost up their speed and save themselves first. The leatherback sea turtles hold the track record of being the fastest sea turtle in the world.