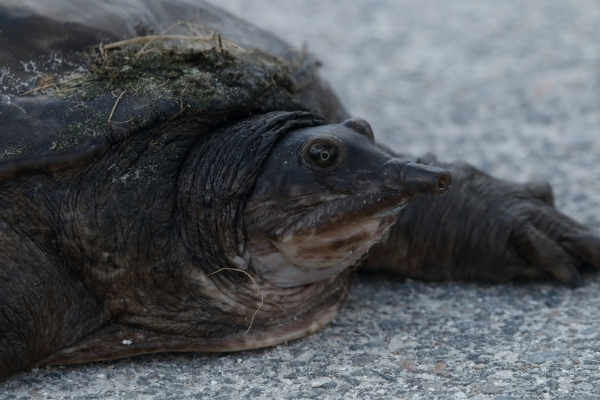 I always recommend knowing a turtle’s behavior before buying or adopting it. Why? Because you need to see if it is cool tempered or gets angry easily. Thus you can treat the pet the way it likes. In this article, I will only focus on the behavior of Florida softshell turtles. Let’s see if they bite and act aggressively or not.

If you are curious to know more about a Florida softshell turtle’s behavior, then read this article to the end.

How Does The Bite Of A Florida Softshell Turtle Feel Like?

Whenever anyone asks me this question, it reminds me of one of the quotes of a wildlife artist. He said that he was not afraid of snakes. But he would not dare to mess with the softshell turtles.

Blood can come out of the wound. The Florida softshell turtle bite will leave a deep mark or a single scratch on your body.

Do The Florida Softshell Turtles Have Teeth?

However, when the Florida softshell hatchlings emerge from the eggs, they have caruncles. The caruncles are known as the egg teeth. The hatchlings can not break the eggshell with their claws or any other parts. So, they use egg teeth to come out.

You will find a caruncle at the front of the upper jaw of a baby Florida softshell turtle. The egg teeth of the species fall off after one or two months.

In short, the Florida softshell turtle uses its long neck to reach up to the predator and the sharp jaw to attack.

Why Do The Florida Softshell Turtles Bite?

So, do not mess with a Florida softshell turtle. It can attack you to save itself. And its bite is excruciating.

How To Catch The Florida Softshell Turtles?

Most of the time, the Florida softshell turtle bites if you pick it up in the wrong way. You know these guys do not have a softshell. So picking them up can be a little bit challenging. Here is the trick I recommend:

Raise the bottom part of the turtle and slide your hand under it. Make sure the Florida softshell turtle’s plastron is over your palm. Now slowly lift the turtle. Your palms should not cross the midsection of the plastron.

The bottom part above the tail of the turtle will be bent down. Put your other palm there and hold the turtle gently, keeping its face slightly upward.

You need to be extremely gentle while picking up the Florida softshell turtle because they are very aggressive. If you try to hold them with their sides, they can kick you or slide and fall on the ground. However, if you catch it keeping its face towards your hand, you may get a bite.

A few days back, I saw a video where a guy suggested flipping the softshell turtle and hold. I highly discourage this act. Because flipping the turtle over and over can hurt and make it angry.

Picking up the softshell turtle can be challenging for the first time. It can kick you with its claws, but with the time you will master the technique.

Here is some advice for you. If you find any softshell turtle in the wild or beside a freshwater source, do not pick it up. Even if you catch it, leave it exactly where you find it. Do not mess with its direction.

Can The Bite Of A Florida Softshell Turtle Make You Sick?

In most cases, the bite does not make you sick. A deep bite can make your wound bleed and will leave a permanent mark. The wound can hurt, but nothing else.

In some cases, handling the Florida softshell turtle or its bite can make you sick. Some experts claim that the species carries a strain of cholera. So, if you get bitten by an ill turtle, you will need some medications.

However, who does not know about Salmonella bacteria? A wild Florida softshell turtle or even a captive one can sometimes carry Salmonella disease. If it bites you, you will get Salmonella too.

What To Do If A Florida Softshell Turtle Bites You?

Do not get scared reading the previous section. The bite of a Florida softshell turtle may make you sick or may not. But you need to take immediate action after getting bitten by one. What should you do? Here are some advices:

If you worry too much about the bite, then you should consult with a doctor immediately. However, you must follow some tips to avoid any kind of biting. Such as:

If you need to handle the pet, use gloves. And wash your hands before and after touching the pet. Also, if the pet has Salmonella, keep it away from the children and pregnant ladies.

The Florida softshell turtles bite, and it hurts. But they are good pets and only attack if you make them vulnerable, stressed, or panicked. So, do not mess with them and treat them well.

link to Are Softshell Turtles Endangered?

Have you ever wondered if softshell turtles are endangered or not? This is one of the basic questions we, turtles lovers, should care about, but we don’t. We only focus on raising the pet and do...

I have heard a lot of people saying that the Florida softshell turtles are dangerous. And many of them do not want to pet the species. If you are thinking about buying or adopting a Florida...