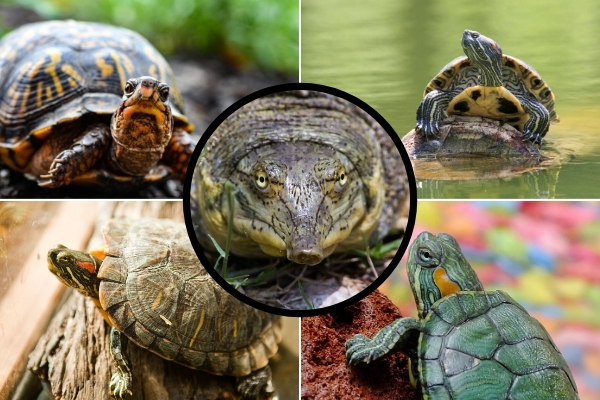 Choosing the perfect tankmate for a turtle is not less than a hassle. You have to consider the turtle’s behavior, comfort zone, and how compatible it is with the partner. Generally, we have a tendency to raise multiple turtles in a single enclosure. So, when it comes to a softshell turtle, can they make a match with other turtles?

Due to the aggressive behavior of the softshell turtles, it is hard to raise other turtles with them in the same tank. You can try to put a pair of softshell turtles in a single tank, but you have to be alert all the time.

If you are wondering which turtles or animals are compatible with a softshell turtle, give this article a read. I hope you will get all your answers.

Can Softshell Turtles Live With Other Turtle Species?

A baby softshell turtle requires a minimum of a 20-gallon tank. So, if you are raising 2 turtles, you need to provide a tank of 40-gallon. Also, they must build enough hiding spots inside the enclosure. Ensure that there is enough space on the basking spot for the two turtles.

However, you must assure that both the turtles are getting enough food. Otherwise, there can be a fight over food or space.

Some owners create a visual barrier to avoid any fighting. But the home aquariums are not big enough for that. That is why experts suggest not to raise more than one softshell turtle in a single enclosure.

Even if you put another turtle with a softshell turtle, ensure enough space and food. Softshell turtles have softshells, and they are vulnerable. If the hard shell turtles attack them, they will get severely injured. It may lead to shell and skin infections. Also, observe the turtles after mixing them for the very first time.

Can Softshell Turtles Live With Fish?

Like the above question, this one is also confusing. Some people have got a positive result raising a softshell turtle with fishes. On the other hand, many people have lost either their pet fishes or got their softshell turtles injured. Researching many sources and from my personal experience, I have come to a conclusion.

If you have a baby softshell turtle or hatchling, you can put fishes bigger and faster than the softies in the enclosure. For example, pacu, African Fish (Cichlid), Uaru, pike, snakehead, phantom pleco, etc. When the turtle starts growing, you need to put it in a separate tank.

If you think only softshell turtles attack the fishes, that is not always true. Sometimes the fishes come and start irritating the softie. And at a point, the pet turtle bites the small fishes.

When you are raising fish and softshell turtles in the same tank, you need to make sure there is enough space for all the pets. Also, there must be enough hiding spots for the fishes.

If you keep fish with an adult softshell turtle, the fish will probably end up having injuries or losing its life. The adult softshell turtles can grow up to 25 inches, and they are carnivorous. Fishes are one of their most favorite meals. So, you can understand what can happen to the fish.

Some experts claim that a softshell turtle can live with the big fishes. Also, if the fish is fast-moving, the pet turtle will be unable to harm it. However, in some cases, the softshell turtles really do not disturb the fishes at all, no matter if they are big or small. So, basically, raising fish with softshell turtles mostly depends on the behavior of the turtle.

However, there is another way of putting fishes in the softshell turtle’s enclosure. You have to build a big outdoor enclosure or an over 500-gallon tank.

Most experts and turtle owners discourage raising adult softshell turtles and fishes in the same tank. They strongly believe that one party will end up injuring itself.

Can You Raise Two Softshell Turtles In the Same Enclosure?

I have talked about if a softshell turtle can live with other turtles or fishes. But what about living with another softie? Researchers have found that the softshell turtles mostly exhibit aggressive behavior towards their own species. The adult turtles try to dominate the small and young ones.

If you put two adult male or young softshell turtles with one adult, there will be lots fighting in the enclosure. However, adult female softshell turtles are not very aggressive and play a passive role in the fighting. The male softies can try to dominate the female and exhibit rough behaviors to the female ones only in the mating season.

You already know that housing multiple softshell turtles or another turtle species with a softshell turtle is not appreciable. But if you are determined to do so, here are some tips that might help you reduce the fighting: