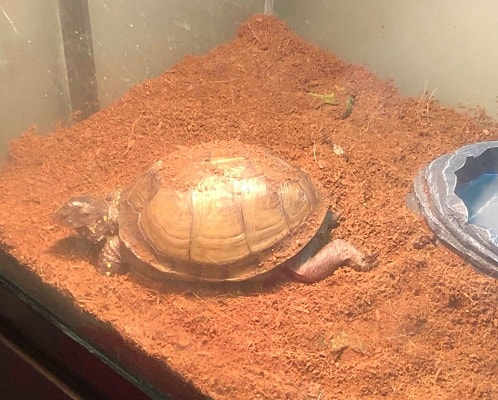 Before adopting a box turtle as a pet, you must gain proper knowledge about its habitat. I have seen many people often get confused about a box turtle’s locality.

In this article, I will illustrate the habitats of a box turtle depending on its type and its nesting area. To get a clear idea of the topic, stay with me till the end of the article.

Why A Box Turtle Cannot Live In The Water?

Box turtles belong to the family of Emydidae. Emydidade family indicates that the species spends most of its time on the land.

A box turtle can carry the moisture of its cell for a long time. So if it soaks its body once in the water, it can survive a few days on it. So they prefer living in the grasslands and dense vegetation areas.

Habitats of a box turtle depend on its species. There can be similarities and dissimilarities among them while choosing a perfect place to live.

Pastures, meadows, and marshes are the ideal habitats of a Common box turtle. While choosing a habitat, a Common box turtle tends to select the lands near ponds, streams or swamps. Though it does not like to live in a forest, it prefers areas around moist forested areas with dense and low fruiting plants.

Common box turtles are land-based box turtle, but sometimes they take a long swim in the water. Besides, they love soaking their shells with mud or water from time to time.

A Mexican box turtle makes its home in a leafy area near a water source. Though Mexican turtles spend more time on the land areas, water is essential for them. They collect bugs from the water source, which is a vital part of their diet.

From time to time, they need to soak their bodies in the water. Whenever they get into the water, they spend hours there. Mexican box turtles prefer to stay close to their homes.

From the collected data, we can say that spotted box turtles become more active during summer and monsoon season. They live in shallow areas near a fresh source of water. Clean water source is essential for them because they collect water bugs as their food. Moreover, they use the water source to soak their bodies and rehydrate themselves.

Ornate box turtles live in the grasslands with small grass or plants. They can live in the forests too. They prefer making a home near a stream or water source.

Desert box turtle has the physical ability to live in the deserts. They can adapt to dry and rough conditions. Like other box turtles, this subspecies does not need water to rehydrate from time to time.

Like the spotted box turtle, Yucatan box turtles are hard to find. They love humid areas. Most of the species live in tropical lands, and are found in the land of Yucatan.

Yucatan box turtles prefer isolation. They stay inactive throughout the year except for the rainy season.

Asian box turtle has mixed habitats. They live at the edge of a swamp, pond, or stream. Some of them prefer living in the dense bushes near a water source.

Mother box turtles tend to make nests in dry soil with a comfortable temperature. While making nests, they choose the spot near a water source. As a mother turtle spends more time with its eggs, it does not get in the water for so long. From time to time, it dives into the water for collecting insects and rehydrating itself.

I think it’s always fun to learn different facts about box turtles. I hope you have found this article useful.

link to Box Turtle Full Size: How Big Can They Get?

A box turtle's size is indeed an important information that each turtle owner should know. I have researched a lot to get accurate information on box turtle size. An adult box turtle can be 4 to...

Continue Reading
link to Can A Box Turtle Survive In A Fish Tank?

Like all other pets, turtles need a suitable environment to live. Often the new pet owners get confused about where to put his pet box turtle, and the first thing pops up in their head is a fish...