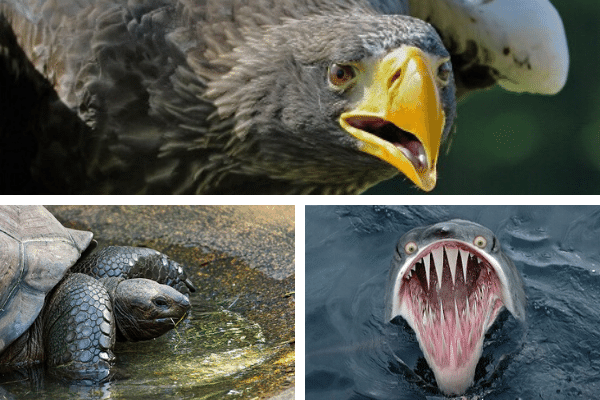 If you want to keep box turtles in an outside enclosure, you need to be aware of the predators. According to a recent study, every year, thousands of box turtles die due to predators.

Some of the common predators for box turtles are Birds, large flesh-eating mammals, different reptiles, fire ants, crabs and sharks in the wild.

In the rest of the article, I’ll talk about each of these predators in detail and let you know what protective measures you can take against each of them.

Some animals chomp on the box turtles. A turtle’s predator depends on the species and the location. In the case of Box Turtles, herons, crows, weasels, ravens, foxes, gulls, raccoons and skunks and sometimes, sharks and killer whales are the predators.

But among all the predators of turtles, here are the most common ones:

The box turtles spend a part of their life on land. The birds especially the bearded vultures notice them from the sky. As birds have better visual acuity and they can see more colors than the human in general, the colorful shell of box turtles attract them.

The birds seize the box turtle, fly above the ground and release them over rocky hard surface. The vultures repeat the same process until the hard boney shell breaks. In most cases, it takes two to three times to break the shell of the box turtle. After breaking the shell, the flesh easily comes off and then the bird feeds on it.

Herons and ravens are one of the biggest predators of box turtles. Also, crows prey on smaller sized box turtles and sometimes on their newly hatched eggs. The seagulls also feed on the hatchling box turtles as the turtles try to reach the safety of the sea after having hatched on the beach.

Many people have reported finding trapped small box turtles in the nests of these birds. Such events are very common around the sea areas.

I have often seen people cover the box turtle enclosure with a net. This ensures that nothing from above can attack the box turtle. Also, covering with a net doesn’t make the enclosure air-tight. So, you can definitely try out this method.

Eating turtles are very common among the carnivorous mammals. Among all the carnivores, the most common is the raccoon.

This happens the most during the reproduction period when the box turtles are near the beach or sand bed for laying eggs. Usually, the raccoons capture the turtles and carry them to a safe place where they can eat it without any disturbance.

Foxes and coyotes including the domestic dogs eat the turtles. Unlike other carnivores, they do not immediately eat the box turtle rather they play with it (in case if they are not very hungry).

They play with it for a while and then eat it. If you own a dog and a box turtle, then you should keep it in a safe distance. This is because most of the time dogs start merely playing with the box turtle, then, its teeth rupture vital organs of the turtle and a game turns into a fatal event in no time.

Along with dogs, domestic cats often kill young box turtles too. Cats cannot puncture their shell with the teeth, but they chew off any body part of the box turtle.

When constructing the outdoor enclosure for a box turtle, make sure the walls are high enough so that no dog, cat or raccoon can jump over the wall and enter the enclosure.

Are you shocked to know that reptiles also feed on Box turtles? Well, the size of adult box turtles ranges between 4.5 to 6 inches. This makes this turtle a very good eating option for the large turtles like Aldabra giant tortoise, red-footed tortoise, etc.

They eat smaller turtles including box turtles. According to Connecticut’s Department of Energy and Environmental Protection-

As the giant tortoise are omnivorous, during basking they prey on the box turtles.

The box turtles are smaller in size and the outer shell can easily be broken with the teeth.

Talking about reptiles, the mature alligators often eat this turtle. Although this small turtle is not enough to satisfy their appetite, they eat almost anything.

Also, in the absence of suitable prey, the mature frogs try to eat box turtles. The Nile monitor loves to binge on the small box turtles, hatchlings and even eggs.

Fire ants are also one of the most common predators of the box turtles eggs and weak hatchlings. The ghost crabs hide in darkness and wait for the young ones to come out of their shell. Sometimes the crabs dig up the nest of the box turtles to devour on the new eggs.

Construct a sturdy fence around the box turtle enclosure so that no unwanted guest can enter.

Box turtles are freshwater turtles but often a significant number of this turtle species is found in the sea. After hatchling, this turtle moves to seawater for safety. This time they fall prey to the larger marine animals like a shark.

It is impossible to capture the sharks to prey on the turtles on the land. The shark can kill a person with one bite, and their diet includes marine fish and mammals including box and other types of turtles.

Sharks open their mouth during eating food. At this time, many aquatic animals enter into their mouth. It becomes quite impossible for the box turtle to escape then.

How Do Box Turtles Fall Into The Prey Of Other Animals?

There are different species of box turtles and each of them has its own choice of housing and dietary needs. Some species prefer humid enclosure, some prefer muddy while some like to bask in sun.

While the eggs and hatchlings of box turtles fall prey to the raccoons, fire ants, crabs, and snakes, the adult ones are hunted by bigger animals.

Therefore, if you are taking your box turtle out for basking under the sun, then you need to be very careful. I heard from many fellow turtle-parents that they lost their box turtle to birds during basking.

Knowing the potential predators of the box turtle will help you in keeping them safe.