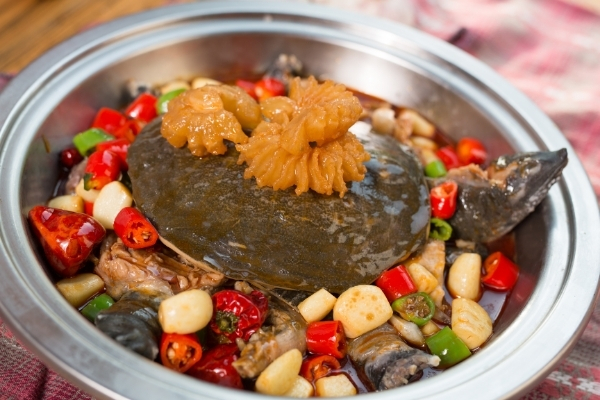 However, just because the meat is delicious, you should not kill and eat an endangered softshell turtle. If you want to know more about softshell turtle poaching, this is the article you need. Also, I will discuss whether it is right to eat softshell turtles or not. Let’s jump into the main point.

Can You Eat Softshell Turtle Turtles?

The answer is, yes. You can eat softshell turtles. This is considered as one of the most delicious turtle meats.

In countries like Japan, Thailand, China, people eat the softshell turtle meat as a traditional dish. Most of the shops or restaurants in those areas sell or serve softshell turtle dishes. People from the coastal areas celebrate weddings, birthdays, or any other ceremonies by adding this dish to the menu.

Softshell turtle meat is quite popular in the United States too. Some restaurants serve authentic dishes. Softshell turtles live in freshwater sources. So, when people go camping, they sometimes trap and cook the turtles.

Are you wondering what the softshell turtle meat tastes like? Well, I can not tell you for sure as I have never eaten turtles in my life. But I have heard some of my friends describing the taste.

Some people consider the softshell turtle the most delicious eating turtle. In Japan, there is a special dish called Suppon. The Suppon is made of the softshell turtles, and it is very popular. I do not want to get into the detailed recipe as it is nothing but brutality.

The meat is gamey and savory. Some relate the meat to tuna or chicken. Mainly the taste of the softshell turtle depends on which part you are eating. The meat is most like any other meat you eat.

Is It Safe To Eat Softshell Turtle Meat?

The meat is safe as long as you clean and cook it properly. But what will happen if you eat dirty softshell turtles?

The softshell turtles are indeed freshwater turtles. But with the increasing water pollution, they are forced to live in the contaminated water. Thus, there always remains a chance that the wild softshell turtle is carrying illness, chemical stains, toxic chemicals, and heavy metal. Consuming meat will surely make anyone ill.

Some experts claim that wild softshell turtles can carry the stains of cholera. Eating them can make the person sick. However, Salmonella is the most common disease of the softshell turtles. Touching those ill softies without precautions can transmit Salmonella to humans. And eventually, this will lead to vomiting, stomach aching, diarrhea.

How Does Eating Softshell Turtles Affect Its Wild Population?

Softshell turtle poaching affects its overall wild population in a bad way. In 2000, the softshell turtle cultivation market was around 30% in just China. But with the increasing demand, the sales increased to 70% in 2007.

Trapping the wild softshell turtle and using them for breed impacts the total ecosystem. It creates extra pressure on the wild turtle population.

You will be surprised to know that most species of the softshell turtles are rare or endangered. Using them for business purposes will make the condition worse, nothing else.

A few years back, a team of scientists experimented on 150 softshell turtles, both wild and farm bred. After several testing, they concluded that the farm bred softshell turtles can not carry the pure lineage of the species. So, the increasing number is not doing any great job.

Again, sometimes the farm bred softshell turtles escape and run into the wild. If they are involved in mating with a wild bred, the hatchling will not be a pure softshell turtle species. Instead, they will be a standard turtle.

So, cultivating, eating, or poaching softshell turtles does not help to conserve the species. These acts affect the wild turtle population and create an imbalance in the ecosystem.

Is There Any Way To Reduce The Negative Impact?

To save the wild population of softshell turtles from extinction, scientists have introduced us to the ‘bio-turtles’. These turtles are bred maintaining all the organic guidelines without harming any specific species. The meat of these turtles is delicious, though they are a bit expensive.

Supermarkets in Japan, China, Thailand, and the USA have already started selling the bio turtles. If people start switching to these turtle meats, the pure lineage and population of the softshell turtles will be saved.

Softshell turtles taste great, and their demand is increasing day by day. Eating these rare turtles will push the species towards extinction. So, instead of eating the wild softies, let’s encourage people to switch to the bio turtles.