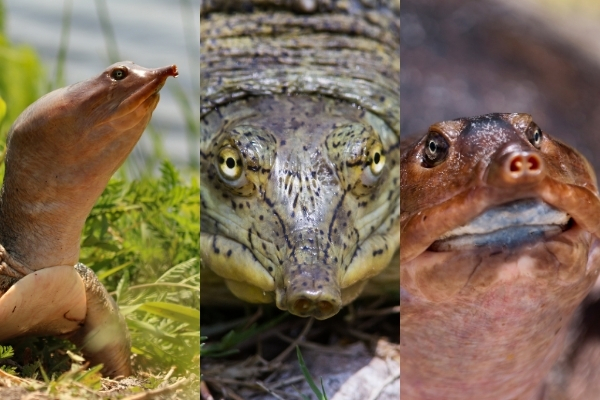 Have you ever wondered if softshell turtles are endangered or not? This is one of the basic questions we, turtles lovers, should care about, but we don’t. We only focus on raising the pet and do not even think about the species’ conservation status. Take the softshell turtles, for instance.

Which subspecies of the softshell turtles are endangered? Why are they at the edge of extinction? What can you do to save them? If you have the slightest curiosity about these questions, give this article a read.

The Conservation Status Of Softshell Turtles

I have mentioned earlier that most of the subspecies of the softshell turtles are rare and endangered. In the following chart, I will show you which species are at the edge of extinction.

One species which is rare in one region can be found easily in another state. But if the species is at the edge of extinction, it is called globally endangered. The vulnerable state indicates that the population of one subspecies is decreasing day by day. The authorities can still save them from extinction with proper action.

You can learn more about rare turtles from this article.

Why Are The Softshell Turtles Endangered?

This is a valid and most important thing each turtle lover should know. The softshell turtles are endangered because of the reasons given below:

Let’s discuss each point one by one.

Habitat loss is one of the main reasons why the softshell turtles are disappearing from the wild. Like most other turtle species, the softshell turtles also prefer living away from human contact. As the world population is increasing, many industries are cutting down forests and filling up freshwater sources to develop their buildings.

Again, when the turtles feel human disturbance, they start leaving the area and look for a new home. So, human disturbance and habitat destruction are responsible for the endangerment of the softshell turtles.

We know our world is getting polluted day by day. Most of the freshwater sources are filled with industrial chemicals and wastes. Softshell turtles living in the wild are aquatic and can not live without the freshwater.

Turtle poaching can be a new term for some of you. So, I will explain it in simple words. I think you know that softshell turtles are considered as one of the tastiest wild dishes. In many countries and coastal areas, people celebrate their occasions and main events with softshell turtle feast.

With the increasing demand of the softshell turtle’s meat, different farms have started harvesting them. The farms in China export softshell turtles all over the world. The species is not only used for dishes but also for making medicines. There is a demand for softshell turtle bones and shells in making some expensive meds.

Do not think harvesting softshell turtles can save the species from extinction. No, it actually affects the negative direction. The pure lineage of one subspecies gets lost, and eventually, the subspecies will disappear.

Again, in some areas, people go on camping, trap softshell turtles, and eat them. All these things create pressure on the wild population of the softshell turtle. This is one of the main reasons why the species is approaching extinction.

Check this article to learn more about softshell turtle poaching.

Buying your softshell turtle from any pet shop is not appreciable. You must buy from the authorized shops even if the price is a little high. Why?

You know the wild turtles can not be a good pet. So, you need a captive bred to raise in the tank. Some illegal sellers catch softshell turtles from the wild and sell them at a low rate. This act should not be encouraged at all. And also, picking turtles from the wild is another reason why the species is endangered.

Can We Save The Threatened Softshell Turtles?

Saving some of the softshell turtle subspecies, such as the Yangtze or the Black one will be tough. But with proper actions, we can still save the others. The concerned authorities need to take immediate and effective steps in this regard.

The good news is the trade and wildlife protection authorities have already passed laws to save the softshell turtles. In the USA, you can not pick up softshell turtles from the wild. If you want to sell, import, or export the species, you need permission and license from the higher authorities.

As an individual, you can also contribute your support to this movement. Do not buy a pet softshell turtle from the black market or illegal shops to save money. Discourage people from eating the meat of softshell turtles or hunting them down.

Most of the softshell turtle subspecies are endangered, and some of them are extremely rare. It is high time we came forward to save the species. If they disappear from the wild, it will affect our ecosystem badly.