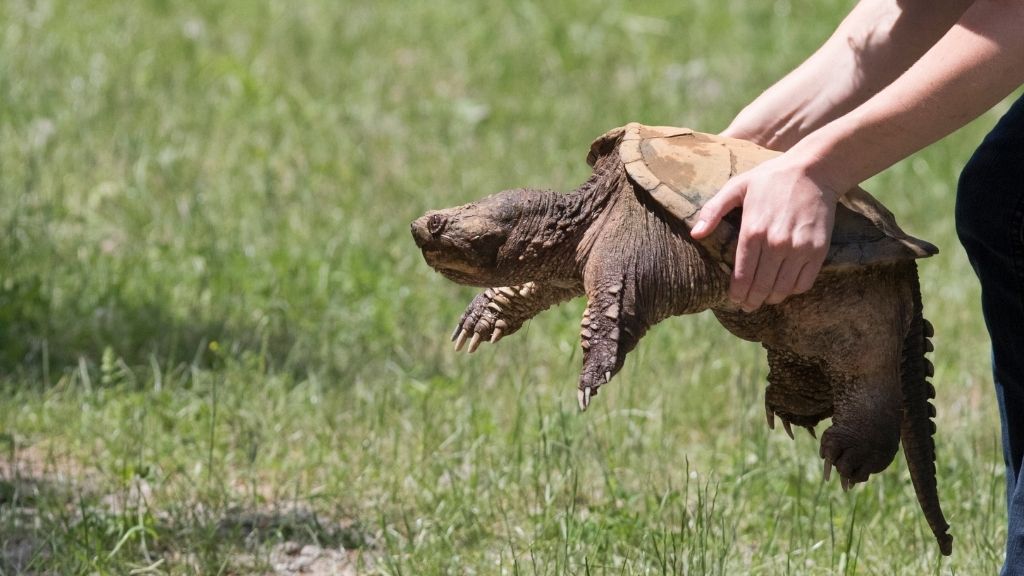 Last week something interesting happened. A team from Nashville Zoo released 16 alligator snapping turtles into the wild. Yes, I know it is not advisable to release turtles. But again, the statement is not the whole truth, and you can free turtles into the wild under certain conditions maintaining proper guidelines.

You can release snapping turtles into a proper site (marshes, canals, rivers, and lakes) after consulting with animal services. Snapping turtles might not survive in any local water bodies. So, research on the site and ask the experts to cross-check the facts.

Are you curious to know the guidelines and proper way of releasing the snapping turtle in detail? If yes, then read this article to the end.

How Do You Catch And Release A Snapping Turtle?

If you are all set to release the snapping turtle, select a site first. Then grab the turtle from the back of the shell using both hands and put it into a pet carrier. Take the turtle to the desired area and free the creature into the wild.

Snapping turtles have the reputation of biting off human fingers with their sharp and powerful jaws. So, catching these turtles, holding them, or carrying them to the releasing spot is not going to be an easy task.

Snapping turtles are heavy and have an attacking behavior. So, carrying them to any other place by hand is a bit risky. It is not only that the creature can bite you, but also you might drop it due to the weight.

Experts always advise moving a snapping turtle in a pet carrier, box, or large bucket. But how will you pick it up? Well, there is a trick that minimizes the risk of bite and any other accident.

Usually, the adult snapping turtles are 8 to 14 inches big. So, holding these creatures by one hand is not an option. Instead, grab the turtles using both your hands. Let’s not complicate the process. Here is a step by step instruction on how to pick up a snapping turtle,

Baby or juvenile snapping turtles are not as heavy as adults. In those cases, you can pick up the pets with one hand only. Here is a foolproof guide on how to pick up a snapping turtle.

How To Release A Snapping Turtle Into The Wild?

You can not just free a pet turtle because of the responsibilities. You must have valid reasons to release the creature.

Generally, there are two criteria you must fulfill if you want to free a snapping turtle. Such as,

Once you know the subspecies, research its native habitat range. If it is local to your region, the chances of the turtle surviving in the wild increase.

Now, if your turtle is native, move to the next step to find out the age of your snapping turtle.

Generally, it is advisable not to release any captive-bred snapping turtle in the wild. Those pets are not great at preying as they are dependent on the owners for their meals.

So survival in the wild environment is challenging for these pet snapping turtles.

Experts believe a snapping turtle of 3 to 4 years is big enough to fight the predators and adapt to wildlife. So, if your pet does not fall into this age range, you can not release it into the wild. Why?

Hatchlings are too naive to struggle for survival. Also, the predators prefer feasting on the babies.

On the other hand, if your turtle is too old, it is habituated to the home routine. So, freeing the creature will only harm its health and decrease the chance of survival.

Can you release your snapping turtle if it fulfills both criteria? The answer is still no.

You alone can not come to any decision. You have to ask for legal approval for this task. Remember, in many states, releasing pet snapping turtles into the wild is illegal and is a punishable crime.

So, contact the animal welfare organizations and the local wildlife authorities. Ask for their permission and further legal procedures. If everything fits well, you might be able to free your pet turtle into the wild.

Where Should You Release A Snapping Turtle?

Snapping turtles are aquatic and freshwater turtles. So, releasing these turtles in lakes, rivers, marshes, or ponds is a wiser option.

Does it mean any lake or pond would work for freeing the snapping turtle? The answer is no.

You have to consult a wildlife expert or zoo for assistance. The authorities will examine the natural distribution map of snapping turtles and decide the best releasing site.

Generally, the local rivers and ponds are not suitable for freeing the snapping turtle. You might have to travel a distance to release the turtles. Use a pet carrier to move the creature from one place to another. Take an expert with you if you feel nervous.

Is It Okay To Relocate Snapping Turtles?

Pet snapping turtles are not great at coping with the new environment. The turtles might survive the sudden lifestyle change. But it risks their health and might disrupt the wildlife balance. Hence, relocating the turtle is not advisable at all.

The whole relocating procedure might sound simple, but it is not. You can not just wake up in the morning and decide to release your pet snapping turtle into the wild. This action not only puts the animal’s health in danger but also risks the wildlife balance.

Take the Nashville Zoo case as an example. The team collected the wild alligator snapping turtle eggs, incubated, and raised them. Not only that, but the researchers also accepted hatchlings from different reputed organizations.

Well, allow me to answer every question.

If you follow my blogs, you already know about the snapping turtle egg invasion. The raccoons or other predators love feasting upon the clutch. As a result, about 1% of the eggs can make it to life and reach the reproduction age.

I know snapping turtles are not endangered. Yet, it is our duty to protect the turtle nests and ensure a sure future for the hatchlings. The Nashville Zoo Turtle Release Team is doing the same thing.

The authority collects wild eggs or hatchlings, raises them until they become big enough to be predated. This way, the risks of endangerment of this species decrease.

Again, sometimes the baby snapping turtles come to the yard with floodwater. In those cases, you might shelter the hatchlings for a few months or years and then release them into the wild. The same goes for an injured snapping turtle.

But, you should never release a pet snapping turtle. In many states, this act is illegal. Also, the pets struggle to cope with the wild environment.

For these reasons, it is always suggested to think about the long-term financial and mental commitment before getting a snapping turtle.

What to do if you are confused about whether to release a turtle or not? The answer is always no. Do not put an innocent life at risk. Instead, you can put the pet for adoption or seek out help.

What To Do If You Find A Baby Snapping Turtle?

If you find a baby snapping turtle, leave the creature alone as long as it is not in danger. In case there is any sign of injury, call animal control for help, or you can take the baby to a vet all by yourself.

Baby snapping turtles are cute and look vulnerable. But the truth is, they are born survivors.

The mother snapping turtle lays her eggs and leaves the nest. The hatchlings come out and make to live all by themselves. So, the hatchlings are stronger than you think.

If you have found a baby snapping turtle, the chances are that the hatchling is roaming around. Leave the creature alone, and it will find its way.

However, if you find a hatchling in a dry land, the baby must have lost its way. In that case, you can relocate the snapping turtle and release it near a water source. If you are not so sure about the releasing site, contact the concerned wildlife authority.

A few years back, I found an injured baby snapping turtle in my yard. I wasted no time and rushed to the vet. I even volunteered and sheltered the baby for a few weeks. Then I contacted my local turtle rescue agency and handed them the baby.

What will you do if you find an adult snapping turtle on your property? Here is a detailed instruction.

It is not recommended to release pet snapping turtles into the wild. But if the situation is not in your favor and you have to do something like this, consult with the wildlife experts first. They will guide you throughout the procedure or suggest you the best way out.