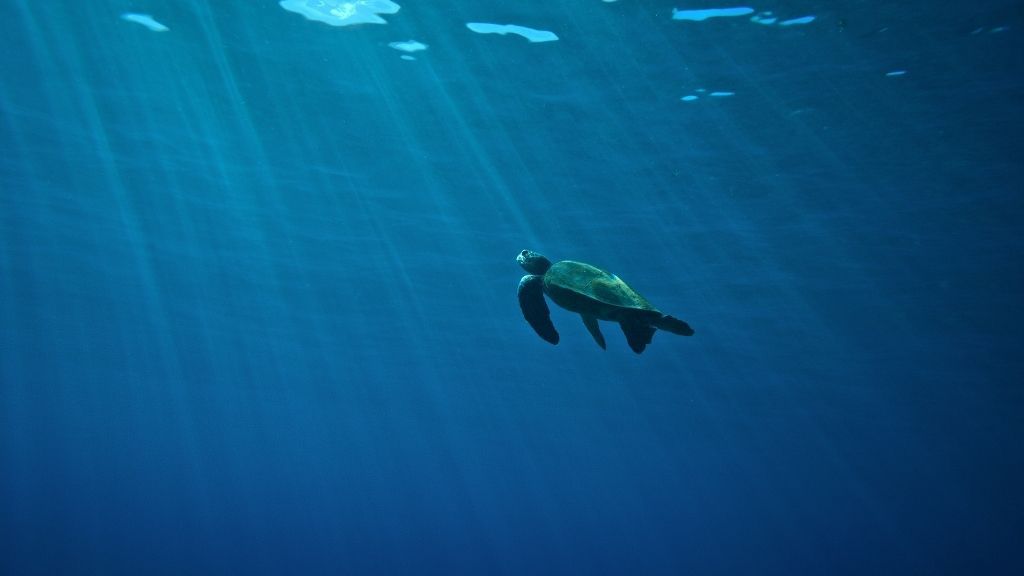 Sea turtles hold the mystery of the ocean and never fail to surprise us. These marine turtles spend most of their lives swimming underwater, and you hardly see these creatures taking a stroll on the beach. Doesn’t it make you wonder how long a sea turtle can hold its breath? Or what is the breathing technique of the species?

On average, sea turtles can hold their breaths for 4 to 7 hours. Even some marine turtle species can stay underwater for 10 straight hours. How long the turtles can be in the water holding their breaths is directly linked to their activity level.

How do sea turtles manage to hold their breath for so long? Can a marine turtle go out of breath and drown? The following article will answer all these questions.

How Long Can A Sea Turtle Hold Its Breath?

I am sure you already know that sea turtles can not breathe underwater. It is because their biological mechanism does not allow them to practice such things. So, how do these marine creatures stay underwater? Yes, by holding their breath.

Generally, a sea turtle can hold its breath for up to 10 hours. The body’s oxygen requirement depends on its activity level. When the turtle is most active, like swimming or hunting, its body consumes more stored oxygen to convert into energy.

In such conditions, a sea turtle can hold its breath for 45 minutes. Then the creature comes to the surface, replenishes its lungs with air, and dives into the deep sea. It is a usual routine for marine turtles.

Now, when the sea turtles sleep or rest, their activity level falls. During those hours, these creatures slow down their body metabolism, their heart rate drops, and so does the oxygen requirement. As a result, the turtles can stay underwater for 4 to 10 hours while resting or sleeping.

However, body oxygen requirements shoot up when the sea turtles are under stress or panic. The turtles trapped in a ghost net deplete stored oxygen within a few minutes. And so, they either drown or die due to the lack of oxygen.

N.B. Sea turtles staying underwater for 4 to 7 hours is the average estimated time. Some species may be able to hold breaths for fewer hours.

For example, many researchers claim that Olive Ridley turtles can sleep for 2 hours in the water. Then they come to the surface for air. Similarly, scientists have documented Loggerhead sea turtles holding their breath for more than 10 hours.

How Do Sea Turtles Breathe?

Sea turtles breathe air, and so, like all other reptiles, they have lungs for such purposes. Even though the lung structure is slightly different from mammals, the gas exchanging mechanism is the same. Sea turtles breathe oxygen from the air and release Carbon dioxide.

You know the physiology of a sea turtle is different from all reptiles. They carry a heavy shell on the back. It is why their breathing is carried out with the help of pelvic and shoulder girdle muscles movement. The plastron also contributes to the ventilation of the lungs.

Sea turtles rock their shoulders while breathing air. These types of muscle movements help the creatures inhale and exhale air by regulating lung pressure. For your information, the subdivided, multicameral lungs of the sea turtles are located under the carapace and vertebral section.

How Do Sea Turtles Hold Their Breath For So Long?

Most sea turtle species can dive 960 feet into the ocean, where the leatherback sea turtles manage to go 3000 feet deep by holding their breath. You already know that sea turtles stay underwater for 45 minutes to 10 hours. But how do they do that?

Well, you already know the answer. Sea turtle’s oxygen consumption rate has a direct link to their activity level.

It is obvious that to do activities like swimming or preying, turtles require energy. The stored oxygen inhaled from air works as a fuel to keep the sea turtles energetic. So, the more the activity, the faster the stored oxygen depletes, and the creatures run out of breath.

On the other hand, sleeping slows down the metabolism of sea turtles. Their heart rate and energy usage are at the minimum while resting. As per the rule, the lesser the activity, the lesser the oxygen consumption, and the longer the sea turtles can enjoy roaming around underwater.

Besides the activity level, the ocean temperature also impacts the diving period of the sea turtles. In colder seasons, the chili water slows down the metabolism and activity of the turtles, and thus they are able to stay underwater for longer with one breath.

However, according to most sources, sea turtles do not hibernate. They migrate to warmer water bodies when the cold season approaches.

Some species like leatherback sea turtles can adapt to the cold water. They use their fatty tissues to generate heat and keep their bodies warm. So, they continue their lifestyle with slight or without any changes, even on winter days.

Turtles are programmed to be the master of swimming. Right? When it comes to sea turtles, they can dive deeper than any other turtle species. So, can they drown?

The answer is yes. Sea turtles drown very often, and the incidents are nothing new.

You know how the sea turtles hold their breaths underwater. Every once in a while, these creatures have to surface to replenish their lungs. Otherwise, the turtles will drown and fall in the arms of death.

Scientists have identified two main factors that made the sea turtles drown. These turtles can get trapped between rocks or in a ghost net for catching fish or crabs. In such closed conditions, marine turtles struggle to get themselves out.

A panicked turtle consumes the stored oxygen within a few minutes. And as a result, they drown and die.

Another thing responsible for sea turtles’ drowning is the courtship method. Marine turtles tend to mate in deep water for several hours. The males mount the females from the back by hanging on the shell. The females have to carry the load of the partners, and the whole thing becomes intense for them.

As the mating lasts for several hours, the couples have to come to the surface for air. If by any chance, the turtles can not reach in time, they drown for sure. According to a report, cases of drowning during courtship are frequent among sea turtles.

For more details, follow my previous article on turtle drowning.

So, how long can a sea turtle hold its breath? A sea turtle can hold its breath for 45 minutes while maintaining a usual routine. During resting or sleeping, the diving period extends to 10 hours. Instead of being a master of swimming, a marine turtle can drown if it runs out of oxygen when diving underwater.