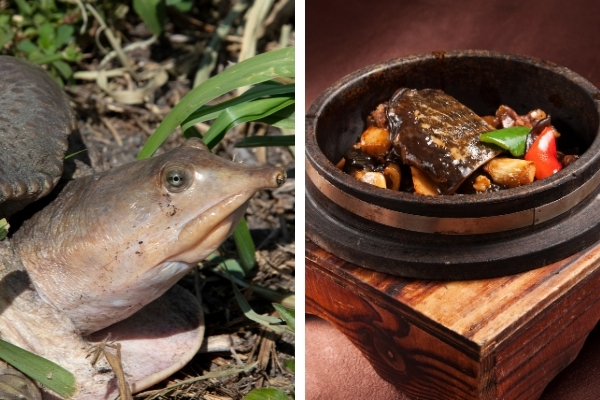 I understand it is brutal to even think about eating the turtles. But believe me or not, in many countries, people consider the turtles as a living creature that they can turn into a delicious dish. And some farms harvest the turtles so that they can sell it to any restaurant and earn a profit. Here the question is, can you eat a softshell turtle?

You can eat softshell turtles. Softshell turtle dishes are very popular, especially in Japan, China and Coastal areas. The exploitation of this species has extremely affected its survival and population.

If you are even a bit curious, then give this article a read. You will get to know different unknown facts about the softshell species.

Softshell Turtle As A Food

You have already got your answer. This species is one of the tastiest turtles to eat. In Japan and many other states, eating the softshell turtle’s meat is considered as a tradition.

Especially in the coastal villages, they celebrate a feast with turtle meat in several ceremonies. No matter if it is their wedding party or shop opening ceremony, they add turtle meat to their menu.

You will be surprised to know that farms are cultivating softshell turtles. Most of these farms are in China, Japan, Thailand, USA, Cayman Island, and Europe. Those farms ship the turtles all over the world. The harvested turtles are used as traditional medicine, gourmet food, pets, or other ingredients.

In many countries and states, people go camping and catch softshell turtles. The species is healthy and has a considerable amount of meat to offer. In the village areas, young people often trap the softshell turtles and sell them in the local markets for extra pocket money.

Is It Safe To Eat A Softshell Turtle?

I know, for some people, turtle dishes are very enjoyable. But have you ever thought about the risk of eating a wild softshell turtle?

Though the species are the freshwater turtles, with time, the water sources are getting polluted. So, there is a slight chance that the turtle is carrying illness-causing chemicals, toxins, and heavy metals.

If you are still tempted to eat softshell turtle’s meat, please clean the meat properly. By eating the turtle, you will risk your health and the conservation status of this species.

No doubt, eating softshell turtles affects its wild population. How? Let me explain it to you.

Softshell turtle farming or cultivation increases with its demand. You will be astonished to see the stats of these farms’ growth. In 2000, the trade was around 30% only in China. The percentage rose to 70% in 2007.

The cultivators believe that breeding softshell turtles from the wild ones will be of superior quality. They buy the wild-caught softshell turtles at a high rate. It encourages the turtle hunters to seek and catch the wild species. And so, eventually, the farming creates an extra pressure on the wild population of the softshell turtle.

However, most of the softshell turtle subspecies are already at the edge of extinction. If we continue eating them, soon they will be extinct. And their end is not a blessing for us. It will create an imbalance in the ecosystem.

If you want to learn how rare softshell turtles are, check this article.

How Eating Softshell Turtles Can Help Conserve The Species?

Often the softshell turtle raising farms or selling shops claim that eating the turtles can help species conservation. Is that right?

A study has proved the thinking wrong. An international team has revealed that farming or commercial production can actually threaten the species. The scientists have conducted some experiments with 150 softshell turtles, both wild and captive.

They concluded that the softshell turtles’ interbreeding could not carry the species’ lineage at the end of the experiment. And so, the breed turtle is more like a standard turtle.

Again, sometimes, the softshell turtles escape the farm and run into the wild. When the escaped turtles engage in mating with a pure subspecies, they give birth to a hybrid species.

So, eating the meat of softshell turtles or farming the turtles does not help to conserve the species.

What To Do To Stop This Act?

It is obvious you alone can not stop millions of people from eating softshell turtles. The best you can do is discourage your friends and family from eating turtle meat. The Govt. should take action to save the species from extinction.

You will be happy to learn that some authorities have passed special rules for farming softshell turtles. They are encouraging the farm owners to offer bio softshell turtles to the market. These turtles will be bred by following all the biological guidelines. Also, the market price of these turtles is really high.

Again, in the USA and some other countries, the Govt. have implemented rules on exporting softshell turtles. If you want to import or export the species, you need to get a permit from related authorities. Also, picking up wild softshell turtles or breeding them in captivity is not encouraged in many states.

Have you just bought a baby tortoise? Congratulations and welcome to the club. I know as a loving owner, you will do everything to ensure healthy growth for your pet. Do you know what is more...

Continue Reading
link to Sea Turtle Size: How Big Can Sea Turtles Get?

The word “Sea turtle” creates the image of a species with a large body, streamlined shell, and flippers in my mind. The marine turtles live a mysterious life in the ocean. Hence, most of the life...