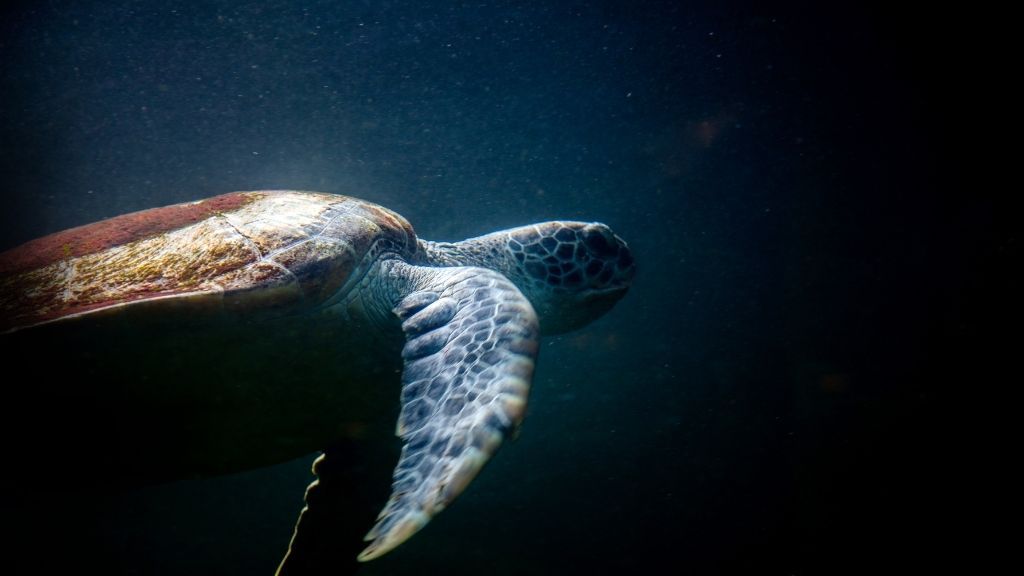 Have you ever caught your turtle walking or moving inside the enclosure while the lights are off? Well, I have. Not just once, but my pet turtles seem to move inside the aquarium when it is dark. To a curious mind, and especially to the beginners, a question can easily pop up. “Can turtles see in the dark?”

Like most other animals, turtles can see in the dark. But they do not have infrared or night vision like cats and dogs. Instead, turtles have a similar night sight to humans.

Curious? If yes, then dig into this article. Here I will talk about the turtle’s vision in detail. So, continue reading to the end.

Can Turtles See In The Dark?

Turtle’s night vision is similar to humans or in a sense, they are better than us. Turtles have a mechanism that helps them adjust their vision, depending on the disposal quantity of light. Does it sound complicated? Let me break it down to you.

What happens when you enter a dark room from a bright light? For a moment, you go blind and with time your eyes get adjusted to the darkness, right? And then you can see things more clearly, even in the darkness.

This is exactly what happens to the turtles too. The more time they spend in the darkness, the more visible things get. If you get a closer insight into the turtle’s vision, you will actually be surprised. They can differ in any pattern or shape within a few seconds even in the dark.

In water, our vision becomes hazy and we need special goggles to protect our eyes. On the other hand, turtles own an unbeatable sight in both the water and land area. Yes, even at night.

As these species have lackings in peripheral or side vision, they can barely prevent those attacks. Other than that, turtles have clarity in their vision. Also, they own a sense of their home pathway. It means a turtle will beagle to find its way back home even if you blindfold it. This is scientifically proven.

How Do Turtles See In The Dark?

I guess I have already described how a turtle’s vision works in darkness. Their night vision is similar to the humans. But as a wild species, they of course are blessed with some extra advantages. For example, while it takes 30 minutes for humans to adjust to the darkness, the turtles require a relatively shorter time.

When a turtle is surrounded by darkness, it does not keep its eyes in the shell. Instead, the pet tries to move its head around to cope with the environment. The oblique muscles in the eyes help the turtle to adjust its eye position with the head.

Also, while staying in darkness, the visual receptors come to life. These enhance the night visual ability of the turtles. As a result, the pet can discern shapes and objects more clearly in the dark.

Do Turtles Have A Strong Night Vision?

It is true that turtles can see in the dark but I won’t say they have a strong night vision. If you compare the turtle’s night sight with any other animals like dogs or cats, it is very weak.

The animals that can clearly see in the dark have an increased number of light receptors in their retinas. Similarly, turtles contain rod cells in their retina. It helps them see even in the prevailing light conditions. But compared to the cats, dogs, or wolves, these cells are limited.

The rod cells of turtles are a little more than humans. This gives them the advantage to adapt to the darkness or light spectrum more quickly. The turtle’s retina can boost their night vision with time. It means if the pets spend more time in the darkness, their vision will get better in the long run.

Do you want proof of turtle’s not having a strong night vision like dogs or cats? Well, here is a little experiment you can perform all by yourself. You just need a phone camera with a flash for this purpose.

Try taking a picture of a dog and a turtle in total darkness and keep your flash turned on. You will notice the eyes of the dog are glowing. On the other hand, the eyes of the turtles will not reflect any kind of glow.

How does it prove my statement? According to scientists, nocturnal animals have tapetum lucidum in their eyes. This a layer of tissue that lies just behind the retina.

The tapetum lucidum works as a retroreflector in the dark. It means these tissue cells have the ability to increase the visual power even in low light conditions. The cell membranes collect the photons and send them back to the eyes. And eventually, the nocturnal animals get a clear sight in the dark.

When you take a photo of any nocturnal animal with the flash on in the dark, the tapetum lucidum is responsible for the glowing eyes. You can conclude it in this way. The turtles may not have the visual power like an owl in the dark, but they can clearly see the objects.

More or less all turtle species swim in the water. The aquatic and the semi-aquatic turtles spend most of their lives underwater. This makes people wonder if turtles can see underwater or not.

Of course, turtles see underwater. If not, then they will not be able to move so smoothly in the water, right? You will be amazed to know that turtles can see clearly in both water and land. Even the turtles have a more clear vision than humans underwater.

The experts claim that turtles have a special kind of mucus in their tears. This mucus covers their eyes with a layer and protects them from any harm. In a sense, you can compare it to the goggles we wear while diving or swimming in the deep water.

However, turtles may shed tears when they are in severe pain. For example, a sick turtle or the gravid turtle may shed tears while laying eggs. How will you know the difference? The mucus is thick in density and it does not fall off from their eyes. Rather it will stick to the turtle’s eyes.

The only thing that can hinder a turtle’s sight underwater is dirt. If the water is filthy, it will resist the pet from seeing the objects in the distance. Other than that, a turtle’s eyesight works similarly in the land and water.

This is an interesting question. Like all of us, the scientists were curious about the turtle’s color reception. Even a few years back, people believed that turtles are colorblind. But the recent discoveries have proved this statement wrong.

You will be amazed to know that turtles can see more colors than humans. The cone cell is responsible for the colors we observe around us. Humans have the ability to process 3 different wavelengths, red, blue, and green. These 3 rays mix up and generate all the colors of this world.

When it comes to turtles, they have an extra color receptor of red wavelength. It means these pets can see more shades of reds that are out of our existence. This extra receptor gene is called CYP2J19.

Though the turtles have a similar vision to humans, they are a lot more advanced. With only 3 color receptors our world is this much beautiful. Can you imagine how much more colorful the world is to the turtles?

I know while raising a pet different questions come to our mind. When I bought my first turtle, I used to wonder, “Can it see me?” or “Will it be able to recognize me?”

As I have mentioned above, turtles have a clear vision. So, there is no way they can not see humans. The scientists suggest turtles can clearly see humans. These little pets have the ability to distinguish people.

You already know that turtles have an extra red cone. This makes everything a little more reddish to the pets. So, the turtles see humans in a red hue color.

When it comes to recognition, turtles know their owners. Yes, it is true. Many turtle owners do not realize it but your pet knows your sound and appearance. This solves the mystery of why pet turtles come to the surface of the water when the owner is around.

Should The Enclosure Lights Be On At Night?

When we build an indoor habitat for the turtles, our main purpose is to replicate the wild environment as much as possible. If you keep the light on during the night, your whole purpose will be ruined. In my previous article, I have mentioned that turtles sleep at night. Keeping the light turned off can ruin their sleep cycle.

So, it is better not to keep the lights on at night. But sometimes, owners set up night bulbs to observe the pets. In that case, go for the blue or red lights that are not bright. Night viewing lamps or infrared bulbs can be a great option for you.

Experts suggest setting up these lights only during the cold. These bulbs offer heat with no brightness. In other seasons, the heating lamp will do the work. Keep that on 10 to 14 hours a day.

Do not worry about your turtle in the dark. These little pets have a clear night vision and a perfect sense. Also, try keeping the tank water clear so that the pets do not struggle to see underwater.

link to How Fast Can A Sea Turtle Swim?

When it comes to swimming, turtles are way ahead of the tortoises, especially sea turtles. I know the speed of any turtle species is nothing to boast about. Still, you can not ignore their swiftness...

Continue Reading
link to Snapping Turtle Release Guide: How & Where?

Last week something interesting happened. A team from Nashville Zoo released 16 alligator snapping turtles into the wild. Yes, I know it is not advisable to release turtles. But again, the statement...