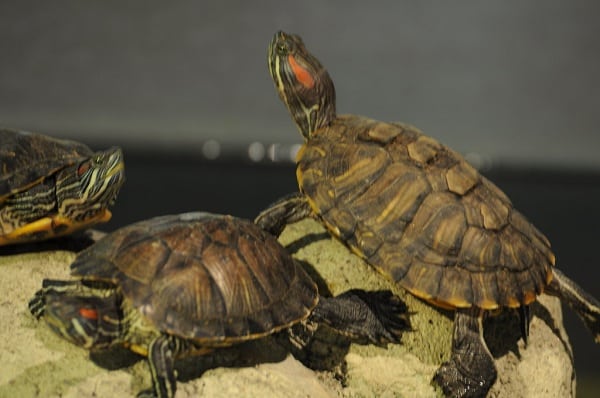 Are the red eared sliders invasive? What helps them to spread quickly? How they are being controlled in many states around the United States? Whether you own sliders or not, these interesting information about their habitat, living, and adaptability will amaze you. I as an owner of the red-eared slider was astonished to know this.

The red-eared sliders can have devastating impacts on the ecosystem of the pond. The sliders eat almost everything from small fish to insects to water plants. Hence, when they are large in number, they mess up the total ecosystem of the water body.

What Is The Habitat Preference Of The Sliders?

The sliders love natural freshwater habitats including the marshes, swamps, lakes, ponds, rivers, and streams. They are also fond of manmade habitats such as the park ponds/ lakes, canals, and ditches.

The sliders prefer water without a large current. This means that they prefer the slow-moving water bodies that have soft bottoms and enclose an abundance of small fishes and aquatic vegetation along with a nearby basking site. The basking site is very important to the sliders.

Red-eared sliders are abundant in the Mississippi valley from the Gulf of Mexico to Illinois, and the Cumberland River valleys and Tennessee, from Alabama to Virginia and Kentucky.

Why Sliders Are Increasing In Nature?

A row of sliders chilling under the sun by the lake- is it a delightful idyllic scene? If you have spotted them then, in most cases these are abandoned pets. The sliders live up to 50 years and they can grow up to 30 cm or 12 inches in length.

Sometimes, it becomes hard for the owners to honor these pets for a lifetime commitment. Instead of looking for a shelter or new home for their pets, in most cases, the owners abandon in nearby ponds and lakes.

According to a report conducted by the California State Government-

Around 6 species of turtles are abandoned or released in the wild by their owners.

The turtles raised domestically are unable to survive in wild however, this is not the case for the red-eared. Among the other species, the sliders are capable to adapt in wild. One interesting fact is, the male ones find the females and therefore, they reproduce and increase in number. If the abandoned sliders survive the ordeal of wildlife, it starts to increase in number.

How The Red-Eared Sliders Come To The Owners?

Well, the pathway to the owners is pretty simple. Just like mine, the sliders continue to be introduced in new areas through the international and domestic pet trade.

Between the years 1989 to 1997, more than 52 million sliders were exported to international markets from the United States.

How The Sliders Affect Nature?

Sliders in abundance affect the nature, the aquatic wildlife, the eco-system. Here are the following impacts that the red-eared sliders impose:

Negative Impact On The Other Turtle Species

Like I mentioned before, sliders do not just destroy the eco-system but they have some attributes that seem to grant some advantages over the native species. The sliders mature at a comparatively younger age and they tend to be more aggressive, have a larger body and have high productiveness.

Several studies show evidence that the rate of success for competing for food, nest or basking site is much higher and in favor of the sliders.

So, if the red-eared slider becomes abundant throughout the water bodies of a state in high potential then the native turtle species will suffer.

The sliders often pose a health risk to the other co-existing red-eared sliders and painted turtles.

The sliders when going from domestic life to wildlife often suffer from frequent respiratory problems. As this disease is contagious, it can affect the other fellow or co-existing turtles in the lake.

So, along with spreading disease, the sliders make it difficult for the other turtles in respect of nesting sites, food, as well as basking habitat.

As the sliders are omnivorous, especially the younger ones, they have an effect on the available aquatic prey or food items including many other rare animals such as rare amphibians. Red-eared sliders can pose a major threat to aquatic life if they increase in number.

The sliders can be a potential threat to the nearby nesting water birds.

With a sudden increase of the red-sliders in nature, they can take over the nests for basking under sun and damage and prey on the hatchlings and eggs.

Based on the given points, it is reasonable to say that increasing the number of red-eared sliders can pose a major risk in the area.

What Is An Effective Method Of Control?

Controlling the sliders can be a bit expensive (and also a pain in the ass). A lot of the countries around the world have passed laws in order to control the number of red-eared sliders.

Some of the countries are also controlling the possession and release of these turtles. Also, many pet shelters are collecting eggs, capturing the big ones and taking care of them in their possession.

California is experiencing a large number of red-eared sliders, so they are catching and sterilizing the turtles. In Australia, the sick sliders are euthanized and the juveniles are sterilized. Such measures are effective in respect of resource and time.