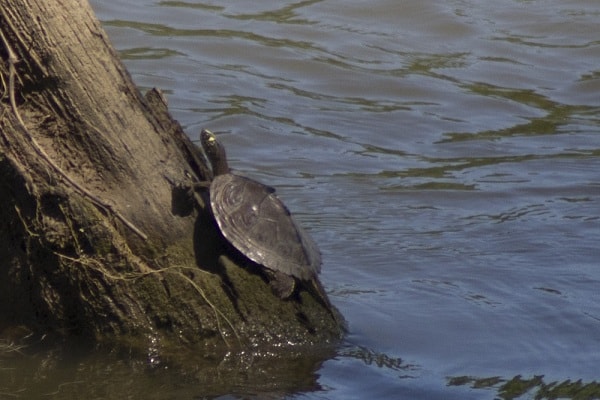 Many people do not believe that pet turtles can have emotions. Like other pets, your map turtle can experience various emotions too. So, before adopting or buying a map turtle, you have to understand its behavior. It will help you to grow your pet well.

Map turtles are friendly little creatures. But sometimes these friendly creatures can be aggressive depending on the situation.

Why Does A Map Turtle Get Aggressive?

Map turtles are not social yet friendly creatures. But depending on some situations, the pets can get very aggressive towards the other turtles, tank mates, or the owner.

The main reasons behind a map turtle’s aggression are,

Most of the time, the reason behind a map turtle’s aggression is space. This problem mainly arises when you house multiple map turtles in a small tank.

Map turtles want space for swimming. When you house multiple turtles in the same tank, the pets do not get the freedom they need. And so, they start fighting each other for territory. By territory, I am indicating the water and basking area.

The dominant or influential map turtles start chasing the weak ones. And if they get a chance, they can injure the opposite party.

Map turtles are wild animals. It does not matter whether your pet is a captive breed or not, it has some wild instincts and habits. We know that the wild, the map turtles have to fight for food and survival. So, in captivity, they are driven by this sense too.

When you provide food to your map turtles, they start fighting each other for food. They begin showing aggression. The behavior continues even if you give them enough food.

Mating is a natural process for the map turtles. If you put male and female map turtles in the same tank, you may observe that the males are showing aggression towards the female ones.

Other Reasons Behind A Map Turtle’s Aggression

Besides these main reasons, some other things can make a map turtle aggressive.

When the map turtles are little or at their young ages, they act friendly with each other. But when they grow up, this friendly nature vanishes. Each turtle wants to dominate over the others. Notably, the adult male map turtles can act aggressively towards the other males and young ones.

Sometimes the map turtles get aggressive if you disturb it continuously. This happens more often when guests come to your house and try to play with the pets.

What Do The Map Turtles Do When They Are In Aggression?

Unlike a human, pet map turtles do not have different ways to show aggression. They bite or chase each other whenever they become aggressive. They nip each other’s neck, feet, or tail. Sometimes the map turtles get themselves injured because of the nipping.

What To Do If You Map Turtle Is Showing Aggression

If you observe any sign that your map turtle is chasing other tank mates or showing aggression, you have to isolate it immediately. Leave the pet alone for some time so that it can calm down. If you disturb the map turtle, it will be stressed and act more aggressively.

At that time, you have to handle the pet carefully. It is because the pet can bite you too out of aggression.

After leaving the pet alone for some time, it will calm down, and you can put it back in the main tank. But remember one thing. If you house multiple adult map turtles together, this type of incident will take place more often. So, you have to build a separate house for them if you can.

How To Avoid The Fights Of Your Map Turtles

We know that the map turtles involve in a fight if they are in aggression. And it happens when you house more than one map turtle in a tank. So, how to get rid of the fight?

What To Do If Map Turtles Bite Each Other Out Of Aggression?

It is the most common scenario inside a map turtle’s tank. Most of the time, nipping or bite is not dangerous. But the victim map turtle will definitely get some injuries. Here are the things you have to do,

In case of anything severe, take the map turtle to the vet.

Your map turtle can bite you if you disturb the pet when it is not in a good mood. What will you do then?

If you feel the wound is severe, you must consult a doctor immediately.

To know more about a map turtle’s bite, read this article.