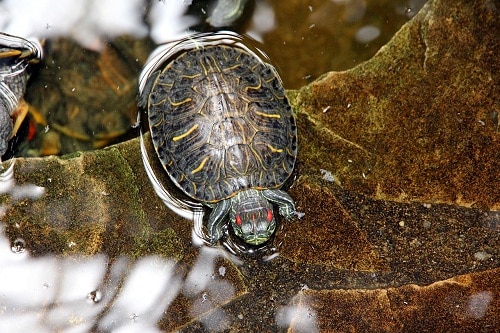 The title of this article may sound a bit gross for some readers, but is it a rare occurrence? You may not know this, but it happens a lot in the animal world.

Let’s get to a bit of details.

Why Do Red Eared Sliders Eat Their Poop?

If you think about this question hard enough, the answer may seem to be logical to you. Red eared sliders are known to eat their poop, especially the feces of other elder turtles to gain healthy bacteria from the poop.

This practice is known as coprography, and it is done by mostly young red eared sliders. You see, older turtles have symbiotic bacteria that the younger ones need to survive in the wilderness.

The Benefits Of Eating Poop

We as humans might seem to be disgusted by this idea, but turtles, as well as other mammals, eat their poop, and it helps them to survive in harsh environments. In the wild, turtles need to survive as they may often struggle to locate food sources.

This practice is useful in the wild, but even red eared sliders that are bred in captivity also seem to do the same thing. Even though these sliders are fed a healthy and nutritious diet by their owners, they still seem to enjoy the taste of their poop.

Why does that happen? Our turtle friends are not as smart as us, thus they seem to forget that they are not living in the wilderness.

You may think that your turtle doesn’t do such a thing, but you have to stay vigilant at all times. Especially when there are sick turtles around. If your turtles happen to eat the excrements of a sick turtle, they may get sick as well. Thus, you should separate your healthy turtles and house them in a separate compartment in case if any of your other turtles get sick.

Turtles In The Wild May Carry Deadly Parasites

Another deadly fact is that some turtles may carry parasites that remain in their stool. This issue is prevalent when turtles are caught in the wild. So, if you are thinking about introducing a newly adopted turtle in your habitat, make sure that you get a fecal exam and get your turtle checked for any deadly parasites.

The issue of parasites is a serious one, and you should not ignore it! If your turtles are eating poop, then you should be especially careful as introducing a new species of turtle in a captive environment would mean that your other turtles will get sick. If you are vigilant, you can avoid this issue by treating the wild turtle before introducing it to your home.

Do Turtles In Captivity Need To Eat Their Poop?

Did you know that some species of fish also like to eat turtle poop? It is because turtle poop is filled with nutrients that can help a fish to gain more nutrients. It is a normal occurrence and happens a lot in the wild.

Pay Attention To Turtle Diet And Their Water Tank

Most people fail to take proper care of their turtles. Red eared sliders need to be fed with a diet that is filled with green vegetables as well as other sources of protein like fish and chicken. If you are failing to get your turtle access to these foods, they may resort to eating their poop as a means to survive and cope up with their new environment.

Another thing that you should keep in mind is that the water tank that is placed inside the habitat of your pet turtle should be cleaned regularly.

Turtles tend to make their water tanks rather dirty in a quick manner, and these dirty water tanks can be home to tapeworms and other nasty bacteria that can cause harm to your turtles. So, a clean water tank can help your pet red eared sliders to live a long and healthy life.

In conclusion, red eared sliders are just one of several animals who eat their poop to survive in a harsh climate. The environment around them forces these turtles to adapt in unusual ways and find out creative ways just so they can survive and thrive in the wild.

Keep your water tanks clean and their habitat free from any turtle poop. It is very easy for turtles to get sick, especially if they are eating each other’s infected poop. So, you should stay vigilant and practice caution at all times.

You can never be too careful with your turtles and they require proper nurture and care in order to live a long life.